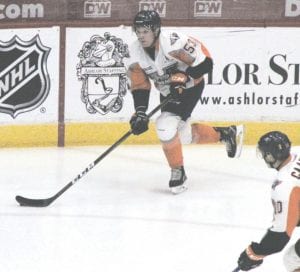 The Alliance’s Dakota Lehman gains control of the puck as he turns to head up the ice against the United on Nov. 18.

FLINT – This past weekend was not an easy one for the Flint Firebirds of the Ontario Hockey League, and it culminated at the Dort Federal Event Center on Sunday with a 9-1 loss to the Kingston Frontenacs. Kingston went on a 7-0 run that Flint could not rebound from.

The Frontenacs took a 3-0 lead in the first period with goals from Tyler Burnie, Nathan Dunkley and Matt Hotchkiss. The middle frame led to Kingston upping the lead to five after Cody Morgan and Jason Robertson each netted a goal. Linus Nyman and Brett Neumann extended it to 7-0 with goals early in the third period before Ty Dellandrea finally put Flint on the board.

Kingston closed out the game with two more goals from Dunkley and Neumann.

Friday’s 6-1 loss to the Spirit in Saginaw wasn’t much easier to take, either. Kyle Bollers scored twice in the first period for Saginaw and Marcus Crawford also added one to make it 3-0 after the opening frame. Blade Jenkins would make it 4-0 just 33 seconds into the second period before CJ Clarke converted Flint’s only goal of the night.

Crawford added another in the second and Aidan Prueter got his second of the season in the third frame.

Making moves for the future

The Firebirds were able to bring back star defenseman Jalen Smereck after he was reassigned to Flint by the Arizona Coyotes. However, a trade was made last week that prepares Flint for the future while parting with two of its top forwards.

Flint received forward Connor Roberts, the third overall pick in the 2016 Ontario Hockey League draft, as well as three draft picks from the Hamilton Bulldogs, in exchange for Ryan Moore and Nick Caamano.

The Firebirds remain at fifth in the West Division at 7-16-2-0 for 16 points. They’ll quickly get a chance to face their former teammates on Friday when they host Hamilton. Flint also hosts Niagara on Saturday and travels to Windsor on Sunday.