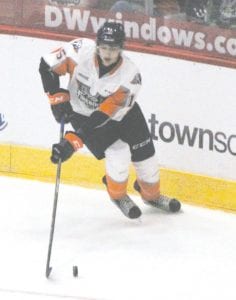 Flint’s Fedor Gordeev gains control of the puck in the defensive zone.

FLINT – It’s been a rough couple of weeks for the Flint Firebirds, and at home on Saturday, it seemed as if their fortunes were turning. That is, before the Guelph Storm shut the door on Flint, giving the Firebirds their seventh consecutive loss, 3-2 in overtime.

Flint struck first when Nicholas Caamano rippled the mesh in the first period, which Guelph responded to just six minutes later. The score remained the same until CJ Clarke buried one for the Firebirds near the midway mark of the third period. Guelph’s Garrett McFadden scored a few minutes later, eventually forcing the extra frame.

With less than a minute remaining in overtime, James McEwan netted the game-winner for the Storm.

Friday’s game against the North Bay Battalion wasn’t easy to take, either, ending in a 5-1 loss.

North Bay scored twice in the first period with goals from Adam McMaster and Kyle Potts and then Riley Bruce and Potts added two more in the second. Justin Brazeau extended the lead to five in the third stanza before Flint finally answered with Caamano’s seventh of the season.

The losses dropped the Firebirds to fifth in the West Division at 6-9-2-0 for 14 points. Flint is at London on Friday and welcomes Sault Ste. Marie on Saturday for Military Appreciation Night.