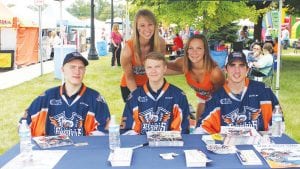 LAPEER — With their inaugural Blue and White contest coming up on Sept. 3, the Flint Firebirds of the Ontario Hockey League have been making themselves available to fans in Genesee and Lapeer County. Recently that publicity tour made a stop at Lapeer Days on the courthouse lawn downtown last Saturday.

“I’m from Florida, but I’ve lived in Michigan for about five years. We’re expecting a big fan base,” said Hakom Nilsen. “A lot of support from our fans is what we’ll need. Season tickets are going to be the backbone of this organization. The feedback has been amazing. The fans here are very excited about the team and we’re excited to start playing.”

Nilsen also stated he thought that Saginaw would be the Firebirds’ big rival this year, a squad they’ll face in the second game of the preseason on Sept. 4. As for the Blue and White game, that contest will take place at the Polar Palace in Lapeer and will double as a fundraiser for the Lapeer County Hockey Association.

“I’ve been here about two weeks and it’s pretty nice. I didn’t know that much when I came here, but I like it,” said 18-year-old Red Wings draft pick Vili Saarijarvi. “I’m in my billet home now and it’s going very good. I like the family. I’m excited about the season. Hopefully it’s going to come soon and go fast. It’s a little bit different. I’m from Finland, and the game style is so much different. I like it more here.”

The rest of the preseason for Flint takes place on Sept. 6 in Windsor and Sept. 20 in Port Huron against the Sarnia Sting. The team will then commence the regular season with a homeand away series with Saginaw on Sept. 24 and 26 before traveling to Owen Sound on Sept. 30 and Erie on Oct. 3.

“I’m from Parma, Ohio, and I’ve been in Michigan four years now. There’s more hockey in Michigan than there is in Ohio, which is one of the reasons I wanted to be here,” said Alex Nedeljkovic. “I’m excited for the season to begin. It’s a fresh start coming from Plymouth, and I think that’s what we needed. We had a rough couple of seasons. It seems like everybody is excited to have us in Flint, so we’re looking forward to it.” — M.S.