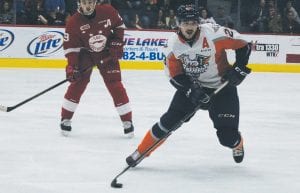 FLINT — After a controversial week in which the entire coaching staff was fired, the Ontario Hockey League’s Flint Firebirds put it all behind them and returned to the ice with a pair of games at the Dort Federal Event Center. Saturday night resulted in a 4-3 overtime loss to the West Division rival Sault Ste. Marie Greyhounds.

Flint opened the game on an unbelievable tear, scoring just 4:14 into the game when Jacob Collins swatted a puck out of the air and into the back of the net. It went under review but was determined to be a good goal.

Just over two minutes after that, Vili Saarijarvi fired one into the top shelf on the power play to extend Flint’s lead with his fourth tally of the year. The Firebirds got back on the power play near the midway point of the opening frame and executed an impressive passing play that led to another goal.

Will Bitten and Connor Chatham set up Ryan Moore, who put it into a wide-open net. Greyhounds’ goaltender Brandon Halverson sprawled across the crease but couldn’t get back in time to stop Moore’s goal.

After the first period, though, the game’s momentum took a complete 180. Gabe Guertier buried a power play goal for the Soo less than five minutes into the second period, finally breaking the shutout.

Later in the period, the Greyhounds got to within one when Tim Gettinger found the back of the net. That, however, would be the last goal scored until the final seconds of regulation. It seemed as if Flint would pull of a third consecutive win, forcing Sault Ste. Marie to pull their goaltender with around a minute remaining.

Twice, a Flint shot narrowly missed sliding into the empty net, and with 6.6 seconds remaining, somehow Guertier found a way to score his second goal of the game, forcing overtime.

The extra frame was not friendly to the Firebirds. A pair of penalties in overtime gave Sault Ste. Marie a slew of offensive chances, and eventually, Blake Speers was able to get the puck past a diving Alex Nedeljkovic for the Greyhounds’ win.

The night before, the story was similar, except Flint was able to hold on for a 4-3 win over the Sarnia Sting. This, however, was the Firebirds’ first game back after a long and controversial week.

“I think the guys were just ready to play. Had a hot start. They gave it to us back in the second and third period but we gladly got the win,” said Flint captain Alex Peters, who is currently out of the lineup with a meniscus injury. “Stuff like this doesn’t happen too often. It really brought the boys together and hopefully that can turn into a couple of wins like it did tonight.”

Just like on Saturday, Flint got off to a really hot start. Just :33 into the opening period, Moore sent a cross-slot pass to Bitten who sent it back to the other post to Nick Caamano, burying it before goaltender Justin Fazio even had a chance to get near it. Not long after that, Moore slapped the puck out of the air and across the goal line for a 2-0 Flint lead.

Dane Johnstone got in on the action with a goal at 15:07 and Zach Grzelewski scored his fourth of the season just two minutes later. It was Flint’s fastest start of the season.

“Now that all of the stuff is settled everybody is here to play hockey,” added Peters. After a first period like that, it was obvious he wasn’t joking.

Sarnia began to answer, though, when Davis Brown scored near the midway point of the second stanza and Jordan Kyrou added another with less than a minute remaining in the second. Pavel Zacha found the back of the net at 11:28 of the third, but Sarnia could not overcome Flint’s start to find the equalizer.

“Everything’s settled now and we’re ready to get playing,” said Peters. “Like I said. We’re just here to play hockey.”

Despite the week of controversy, owner Rolf Nilsen appeared at both weekend games and seemed to be in a friendly mood. It was clear that this was all behind him, and the team was on the same page, as well.

“Well, he’s the owner and it’s up to him really,” Peters stated. “He kind of went about how he normally does and that’s what he’s supposed to do.”

As far as the fan support goes, which has been doubted by some OHL enthusiasts, Peters believes the whole community is on board with the Firebirds.

“It’s been awesome,” he added. “There’s lots of great billet families here. The fans are really awesome. They were coming out on the ice and you can really tell the support is here.”

Flint is now 8-9-1-1 for 18 points in its first season in the OHL as it prepares for three games in three nights this coming weekend. The Firebirds will hit the road on Friday for a match up with the Guelph Storm before returning home on Saturday to face the Barrie Colts at 7:30 p.m. Flint also has a Sunday afternoon game at home against the Erie Otters at 5 p.m.