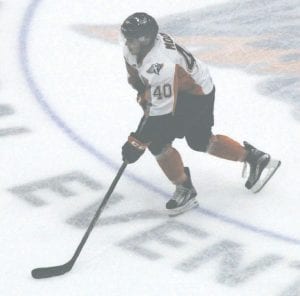 FLINT –The Flint Firebirds cruised past a highly-powered Kitchener Rangers team on Saturday at the Dort Federal Event Center, surprisingly controlling the game, to tie a team-record third consecutive win with the 5-2 victory.

It didn’t take long to get started either, as Flint scored less than a minute into the game. Alex Peters passed to Kole Sherwood, who fired the puck off the inside of the crossbar and into the back of the net. A couple of minutes later, Nicholas Caamano split the defensemen and snuck it between the goalie’s pads to double the lead.

Adam Mascherin finally got Kitchener on the board near the midway point of the frame, but Flint added one more on the period when a juicy rebound bounced to Caamano and he backhanded it in for his second of the night. The second period would see quite a bit of action but no one was able to tickle the twine.

Early in the third, though, Flint upped the lead to 4-1, as Sherwood shot it toward the net but Maurizio Colella tapped it in. Connor Hunnaman tallied the Rangers’ last goal before Flint’s Jake Durham skated in all alone and made a great move for the game’s final score.

On Friday, the Firebirds traveled to the Guelph Storm and jumped out to a big 3-0 lead before allowing Guelph to creep back in over the final two periods. Flint would get the job done, though, with a 4-3 overtime win over the Storm.

Ryan Moore scored first for Flint as he skated into the zone and sniped a wrist shot to the opposite side of the net. Early in the second period, Moore was at it again, this time burying the puck after a pileup in front of the net. A few minutes later, Sherwood came in on a breakaway and scored on a forehand to-backhand deke.

The momentum, however, would quickly shift. Isaac Ratcliffe finally got the Storm on the board in the second period and Albert Michnac and Luke Burghardt would each add a marker in the third to force overtime. The extra period, though, would only take 35 seconds.

Sherwood would gain control of a rebound and slap it from the faceoff circle to convert the game-winner. Garrett Forest was solid in the win, racking up 26 saves.

Flint is now 24-21-1-3 for 52 points, putting it at fourth in the West Division and eighth in the Western Conference, already winning more games than it did all of last season. The Firebirds welcomed London on Wednesday before traveling to Sault Ste. Marie on Saturday and hosting Guelph on Sunday.