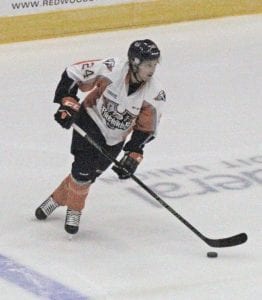 FLINT – The first weekend of the season arrived in the Ontario Hockey League and the Flint Firebirds were prepared, most recently in a 2-0 shutout over the Owen Sound Attack at the Dort Federal Event Center on Saturday night.

The scoring was few and far between but the defense and goaltending displayed their ability to keep the puck out of their own net. Early in the first period, Nicholas Caamano buried the game’s first goal off a feed from rookie Ty Dellandrea.

The score would remain at 1-0 until midway through the third period when Dan Johnstone picked up the puck in the corner and sent it to a wide-open Ryan Moore in the slot, who fired home the one-timer for the insurance marker. Between the pipes, Garrett Forrest got his first start as a Firebird and preserved the shutout by stopping all 27 attack shots.

The Firebirds would suffer their first loss of the season on Friday, a 4-2 road loss at the hands of the Kitchener Rangers. However, Flint did jump out to the initial lead. Dellandrea rippled the mesh for the only goal of the first period.

Kitchener would eventually grab the lead with a pair of goals from Nick McHugh and Kyle Gentles in the second period. Before the frame ended, though, Flint evened things back up as Mathieu Henderson scored his first of the season. Unfortunately for Flint, the third period would belong to the Rangers as they finished it off with goals from Greg Meireles and Elijah Roberts.

Despite the loss, the Firebirds outshot Kitchener, 30-17, and Matthew Menna tuned aside 13 of the 17 shots on goal.

After an eventful inaugural season filled with controversy and turmoil, the Firebirds returned to the ice for their second season in the OHL and made a big splash with a 4-0 win over the Saginaw Spirit at the Dort Federal Event Center on Wednesday.

In front of an announced 3,255 in Flint, the Firebirds looked like a completely different team under the new coaching regime led by head man Ryan Oulahen. It was only the first game, but Flint played a solid twoway hockey game and protected their net extremely well while generating opportunities on the other end; even on the penalty kill.

The first goal took almost no time, and from there it was all downhill for Saginaw. Just 1:03 into the game, Dallas Stars’ draft pick Caamano skated into the slot and passed it to the other post where Dellandrea buried it into a wide-open net.

Flint would take a 2-0 lead into the locker room after Moore came into the offensive zone all alone and flipped it over top of the goaltender after a series of quick dekes, sending the crowd into a frenzy at the Dort.

That momentum would continue into the second period and didn’t seem like Saginaw had any answer for it. The Firebirds were on the penalty kill, but somehow Caamano was wide-open on the Spirit blue line, and after a feed from Moore, Caamano skated in on a breakaway. He would pull some impressive moves of his own before putting it in the back of the net.

After getting back on the penalty kill, it seemed as if this could be a strong suit for this year’s Firebirds team because it led to more success. Moore was one-on-one with a Saginaw defenseman and got past him to record his second goal of the night.

Flint continued to pressure the Spirit net for the rest of the night, and astonishingly, created several more scoring opportunities while shorthanded. In fact, Moore nearly recorded a hat trick on a penalty kill later in the game, narrowly being stopped by Saginaw goaltender Cameron Lamour. Although Flint’s defense was solid, Menna stood on his head all night long, turning aside all 23 Saginaw shots on goal.

The Firebirds, 2-1-0-0, are back in action at home on Saturday against Sarnia and again on Sunday afternoon against Ottawa.