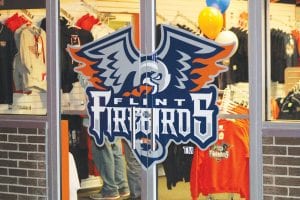 FLINT — At Flint’s Perani Arena on Tuesday, fans got their first taste of what it’s like to have an Ontario Hockey League franchise as they mingled with a few of the players and coaches, picked out their season ticket seats, and even purchased their first Flint Firebirds merchandise.

The atmosphere in the arena lobby was almost that of a nightclub with a video screen on the far end, tables, seats and refreshments everywhere, which led up to the Firebirds merchandise store. The store was loaded with T-shirts, hoodies, hats, pucks, pennants and any other Firebirds’ merchandise. Jerseys, however, must be ordered for the time being.

“We are excited to meet the community (Tuesday) night,” said IMS Hockey President Costa Papista in a press release prior to the open house. “This will be a fun, family style event and a great opportunity for our players and staff to get to know our fans. Our chamber and media partners have been fantastic in helping us connect to Flint, Genesee County and beyond and we are most appreciative.”

Admission was free and open to the public. Walking up to the arena, you could see a few cosmetic changes immediately. Firebirds’ logos are now all over the place, from the sign by the entrance to the glass doors within the arena.