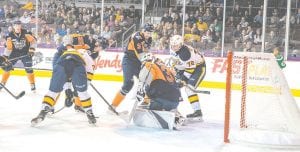 The Flint Firebirds take on the Erie Otters in their second game of the year. Photo provided

ERIE, Penn. – The first two games of the regular season did not go as planned for the Flint Firebirds of the Ontario Hockey League, most recently in a 12-1 loss at the Erie Otters.

Erie built a 9-0 lead midway through the third before Flint’s Ethan Keppen finally put the Firebirds on the board. Erie added a few more late in the game, scoring eight times in the final frame.

Opening night resulted in a 6-2 defeat at the Kitchener Rangers. The Rangers tallied up a 3-0 lead by the halfway point of the second before Hunter Holmes buried his first goal of the season at the 17:13 mark of the middle stanza.

It wouldn’t help, though, as Kitchener buried three more to take a 6-1 lead. In the final two minutes of the contest, Jack Wismer buried a shot for Flint.

Flint sits in fifth in the West division at 0-2-0-0 and travels to Sarnia on Friday before hosting London in the home opener on Saturday.