Firebirds open the season with 2-0 surge 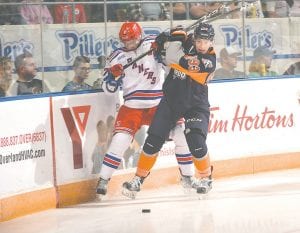 Flint’s Hunter Holmes battles for the puck during Friday’s season opener in Kitchener.

OWEN SOUND, Ont. – The Flint Firebirds have opened the Ontario Hockey League season by pulling off two thrilling and shocking wins on the road, most recently a 4-3 shootout victory over the Owen Sound Attack on Friday.

The Firebirds got on the board just 1:04 into the first period and did so while on the penalty kill. Nicolas Mattinen, Flint’s newest player, stole the puck near the defensive blue line and scored on a breakaway wrist shot. That was followed up just minutes later by teammate Ethan Keppen, who scooped the loose puck from the front of the crease to the back of the net, his first tally in the OHL.

The second period would bring a complete reversal of fortunes. Owen Sound’s Jonah Gadjovich and Nick Suzuki each scored once to draw even after two and Kevin Hancock’s goal early in the third gave the advantage to the Attack.

Flint would answer rather quickly, though. Max Kislinger stole the puck behind the Owen Sound net and sent it into the slot where Hunter Holmes would bury the equalizer, eventually reaching the shootout. It was then that goals by Nicholas Caamano and Maurizio Colella propelled Flint to victory.

Friday’s season-opener had no shortage of drama either, as the Firebirds notched a 5-3 victory at the Kitchener Rangers, a building in which the Firebirds had previously never won. The game turned into quite the backand forth tussle, which began with Adam Liska giving Kitchner a 1-0 lead.

Ty Dellandrea would tie it up when he fired it into an open net after a beautiful cross-ice pass from Caamano. In the second period, Adam Mascherin took the lead back for the Rangers early on before Caamano helped set up another teammate as Hunter Holmes poked it across the goal line.

Once again, though, Kitchener took the lead back with a Riley Damiani goal to make it 3-2 heading into the third, The final stanza would belong to Flint. Fedor Gordeev tied it back up when he connected on a wrist shot from the top of the face-off circle before Dellandrea put it past the goalie for the game-winner on another great setup from Caamano.

The Firebirds iced the game away when Jake Durham buried an empty net tally.

Flint now stands in second place in the West Division at 2-0-0-0 for four points. The Firebirds will host their home opener at 7 p.m. on Saturday against the Ottawa 67’s. Tickets are still available, but limited.