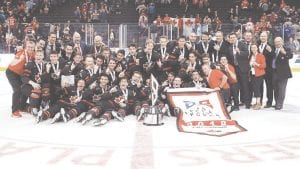 EDMONTON – Ryan Oulahen, current head coach of the Flint Firebirds, secured a gold medal during the Hlinka Gretzky Cup this past Saturday. Oulahen was an assistant for Team Canada during the prestigious tournament, which took place from Aug. 6-11 at Rogers Place in Edmonton.

The gold medal game was determined by a 6-2 victory for Canada over Team Sweden, which was televised on an international level. The tournament consists of the top under-18 players in the world, representing the top hockey countries in the world.

Nineteen of the first 31 selections in this past June’s National Hockey League Draft participated in last year’s tournament, which has been taking place for the past 28 years. The tournament was once known as the Ivan Hlinka Memorial Cup and Canada has captured 22 of the 28 gold medals.

Canada fell into a two-goal deficit before tearing six unanswered tallies and out-shooting the Swedes 40-19 in the final. Canada was also undefeated at the tourney with a 5-0 mark, including wins over Sweden twice and once each over the United States, Slovakia and Switzerland.

This was Oulahen’s fourth stint representing Canada on an international competition level with the Under-17 team in 2014 and 2015 and then taking the job in 2017.