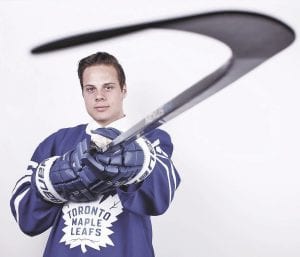 FLINT – The Flint Firebirds made a splash right before the beginning of the regular season on Tuesday, acquiring Nicolas Mattinen from the London Knights. Mattinen happens to be a current prospect of the Toronto Maple Leafs. London receives a 2018 third-round pick, a 2019 second round pick and a 2020 second round pick.

In the event that Mattinen remains in Flint for his overage year next season, the Knights would also get a 2019 third-round pick.

“This is a significant step forward for our hockey club,” said Flint Firebirds General Manager Barclay Branch. “Nicolas brings a wealth of experience to Flint and is a defenseman that has a real presence, both on-the-ice and in the dressing room, and will be a good leader for our young players. He is a type of player that is conscious defensively and has an offensive side to him as well.”

Mattinen will be key to the Firebirds’ lineup on the blue line, especially after the departures of Alex Peters and Mathieu Henderson. He stands at 6-foot-5 and 218 lbs. and was taken in the sixth-round by the Leafs in 2016. Last season, he had six goals, 12 assists and a plus-15 rating for the Knights and also won an Ontario Hockey League championship and Memorial Cup with them in 2015-16.

“It’s pretty surreal, it’s really exciting and I’m looking forward to the opportunity in Flint,” said Mattinen. “I’ve heard a lot of good things about the organization, that it’s ran like a professional team and about the work ethic that the coaches expect out of the guys. I’m just looking forward to being a part of the team this year.”

The Firebirds’ season gets underway this weekend with games at Kitchener on Friday and Owen Sound on Saturday. Flint’s home opener will take place on Sept. 30 against the Ottawa 67’s.