Firebirds pick up Vella in trade with Steelheads 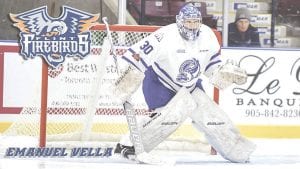 FLINT – The Flint Firebirds recently acquired goaltender Emanuel Vella in a trade with the Mississauga Steelheads. In exchange for Vella, Mississauga will receive the Firebirds’ fifth-round pick in the 2019 Ontario Hockey League Priority Selection.

Vella is a championship-level goalie, having been a member of the 2016 Memorial Cup Champion London Knights, who selected him in the third round in 2014. In 2015, Vella helped the Toronto Patriots win an Ontario Junior Hockey League championship, posting a .917 save percentage.

“We are very happy and excited to announce the addition of Emanuel to our hockey club,” said Flint Firebirds Vice President of Hockey Operations & General Manager Barclay Branch. “Emanuel is a high character person that brings an abundance of experience and leadership to our group.”

Vella had a .896 save percentage last season in 32 games with the Steelheads. He also was named the Goaltender of the Week ending February 25 after winning four games in a row with a .954 save percentage. He was recently in the New York Islanders’ Development Camp.

“The first thing that strikes me is how good the atmosphere is in Flint and how loud and exciting the fans are,” said Vella. “I’m looking forward to learning the area and being a productive member of the community.

“It’s very exciting. The team is on the upswing and there’s a lot of high-end young talent in Flint,” added Vella. “It’s a big hockey opportunity. I’m just looking forward to developing a winning culture in Flint.”