Firebirds pile up goals, lose all three on weekend trip 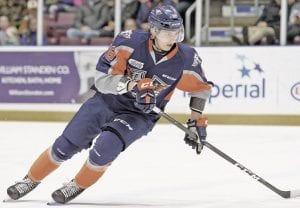 Photo by Todd Boone/Flint Firebirds Flint’s Vladislav Kolyachonok scored a pivotal goal to try and keep Flint in the game during Friday’s loss at Mississauga.

OSHAWA, Ont. – The Flint Firebirds hockey team got some offense going this weekend, but couldn’t seem to notch another in the win column. They were handed an 8-4 loss at the Oshawa Generals on Sunday.

Flint was actually on the board first with Ethan Keppen’s tally less than five minutes in.

The Generals tied it up by the end of the frame, but in the second period, the Firebirds commanded a 3-1 lead. Kyle Harris recaptured the lead for Flint, while Jake Durham’s power-play goal upped it to a two-goal advantage.

However, that momentum would quickly slip away. Oshawa cut it to 3-2 by the end of the middle frame and then exploded through the first 11:28 of the third. The Generals poured on four goals in the early part of the stanza before Flint finally answered with a tally from Eric Uba. Oshawa put it out of reach with a pair of goals in the final few minutes.

A 7-2 loss was a tough pill to swallow for Flint during Saturday’s game at the Niagara IceDogs. Particularly because they once again took the initial lead with Ty Dellandrea burying the only goal of the first period. Niagara scored the only two goals of the second period to take a 2-1 edge and then began pouring it on in the third. They would fire home four straight to take a 6-1 lead.

Keppen stopped the bleeding with a goal at 15:37, but the IceDogs added one more for the fun of it in the final moments.

It was a back-and-forth battle that the Firebirds just came out on the wrong end of in an 8-5 loss at the Mississauga Steelheads on Friday.

Mississauga took the lead 5:22 in the game, but a Jack Wismer tally a little over a minute later evened things back up.

The Steelheads took the lead back, but once again, Flint quickly drew even thanks to Emmet Pierce’s second goal of the season. Mississauga took a 3-2 lead early in the second before Wismer added another to tie it back up yet again. The Steelheads got a bit of breathing room late in the middle frame with a pair of goals to go up 5-3.

Vladislav Kolyachonok cut the deficit to one just 0:45 into the third, but a pair of Mississauga tallies stretched its lead to three. Evan Vierling tried to fight back with his second goal of the season for Flint, but the Steelheads put the game on ice with one more tally late in the contest.

Although progressing, the Firebirds remain in last place at 8-36-3-0 for 19 points.

Flint is at Kitchener on Friday and Owen Sound on Saturday.