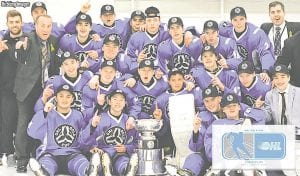 KITCHENTER, Ont. – The Flint Firebirds were proud to have six prospects compete in the OHL Gold Cup May 5-6 with a pair of them taking it home. Michael Bianconi and Owen Power were key pieces for Team GTHL (Greater Toronto Hockey League) Blue taking home the cup.

The six Flint prospects all played in four games over the weekend, including second-overall pick Evan Vierling, who recorded a goal and four assists. Bianconi was selected in the third round and put forth a goal and two helpers and Evan Boucher, Ryan Mansfield and Power each had two points throughout the four games.

The event took place at Activa Sportsplex in Kitchener, Ont. The Firebirds now prepare for the 2018 National Hockey League draft on June 22-23 in Dallas, Tex. The NHL Central Scouting’s rankings currently have five Firebirds listed, a record for the franchise.