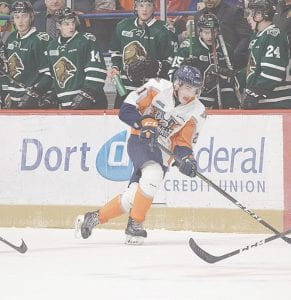 KINGSTON, Ont. – It took nine games – and almost a month – but the Flint Fierbirds hockey team finally got back into the win column, and in dominant fashion, with a 7-1 victory at the Kingston Frontenacs on Sunday.

Jacob Winterton got it going early, scoring just 3:16 into the game.

Kingston drew even to make it a 1-1 draw after one period, but it was all Flint after that. Jack Wismer netted his third of the year just 3:10 into the middle frame and Hunter Holmes netted one on the power play later in the period.

Ethan Keppen lit the lamp just 0:30 into the final stanza before Jake Durham buried a pair of goals that were only 1:36 apart. Wismer buried one more late in the game.

Flint swallowed a 3-0 loss at the Ottawa 67’s on Friday. Ottawa took a 2-0 lead in the first period and never looked back, adding an insurance tally in the second period.

After 35 games, Flint stands at 4-29- 2-0 for 10 points. It is now on a holiday break and won’t return until Dec. 28 against the Erie Otters at the Dort Federal Event Center.