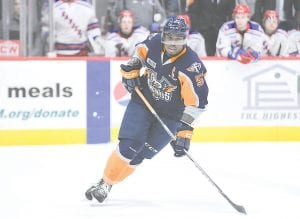 FLINT – After climbing out of a two-goal deficit, the Flint Firebirds were able to even things up, but couldn’t finish it off in a 4-3 loss to the London Knights on Saturday at the Dort Federal Event Center.

Things started off on the right foot for Flint, as Maurizio Colella gave the Firebirds a 1-0 lead just :29 into the game. After that, it went downhill for a bit. Alex Formenton evened it up late in the first period and then scored twice more early in the second to complete the hat trick and give London a 3-1 lead.

Late in the second, Flint turned it on. Ty Dellandrea brought the Firebirds to within one and Hunter Holmes’ goal with less than a minute in the frame tied it up. That score held up until the later moments of the third period when London’s Connor McMichael buried the game-winner.

With only three games remaining in the regular season, Flint is 10th in the Western Conference at 19-41- 3-2 for 43 points. Flint hosted Owen Sound on Wednesday, following press deadlines, and will be at Sault Ste. Marie on Friday before welcoming Windsor for the season finale on Saturday.