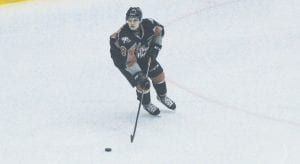 GUELPH, Ontario – The Ontario Hockey League’s Flint Firebirds have continued to struggle a bit since making a pair of key trades, losing their seventh game in a row on Sunday to the league’s worst team, the Guelph Storm, 4-1 on the road.

It didn’t help, though, that it was their third game in three nights with the first and last taking place on the road. Guelph was ready as it jumped out to a 2-0 lead in the first 3:47.

Luke Burghardt and Kyle Rhodes gave the Storm the instant advantage before Flint finally responded 10 minutes later with a Nicholas Caamano goal, his 14th of the year. Guelph added one more in the opening frame as Austin Hall fired it home for a 3-1 lead.

Despite many quality chances, that would be the last goal until 18:50 of the first period as the Storm’s Garrett McFadden closed things out with an empty-netter.

The previous night at home turned out to be a bit of a heart breaker, though. After a ceremony honoring Vili Saarijarvi for his gold medal at the World Junior Championships, as well as Niagara Ice Dogs’ netminder, and former Flint Firebird, Alex Nedeljkovic for his bronze medal, the game saw a fast pace with low scoring.

That is, until the third period. With no goals on the board, Flint took the lead with a wrist shot from Jacob Collins at the 2:25 mark of the third. Not long after that, Saarijarvi’s shot was deflected into the back of the net by Zach Grzelewski for a 2-0 advantage.

That’s when the momentum began to shift. Just a few minutes later, Jordan Maletta buried one to cut the lead in half and with less than two minutes remaining, Brendan Perlini added another to send the game to overtime.

In the extra frame, it was all Niagara and was capped off with a Vince Dunn goal just 1:13 into overtime for a 3-2 final score.

Friday’s game on the road against the London Knights was broadcast nationally across Canada on SportsNet and replayed the next day on the NHL Network. Unfortunately for Flint, though, it resulted in a 3-1 loss.

Brent Moran played a solid game in net, making 39 saves. The amount of shots he faced made it tough on him.

Late in the first period, London’s Matthew Tkachuk tallied the first goal of the game and the only of the opening period. In the second period, though, Will Bitten evened things up with a remarkable play. Bitten stole the puck in the defensive zone and skated down on a breakaway, firing a wrist shot into the top shelf to even the game.

In the third period, though, London put it away with a goal from Cliff Pu at 5:22, a shorthanded tally, and then a Mitchell Marner goal at 11:20.

Flint remains in last place in the West Division with a mark of 14-20- 3-2 for 33 points, five points behind fourth-place Saginaw. The Firebirds will now go on a four-game road trip at Peterborough on Thursday, Kingston on Friday, Ottawa on Sunday and Windsor on the 21st. Their next home game is Saturday, Jan. 23 against Windsor.