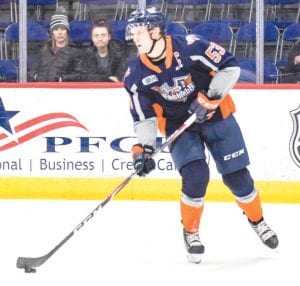 FLINT – The Flint Firebirds are flying high on a four-game winning streak, which culminated with a 4-1 win over the Guelph Storm at the Dort Federal Even Center on Saturday.

Ty Dellandrea lit the lamp with a power-play goal in the early moments of the game, the only first-period tally.

Evgeniy Oksentyuk doubled the lead with the lone score of the middle frame.

In the third, Dellandrea buried his second of the night just 5:05 into the final stanza. Guelph finally got on the board moments later with a shorthanded goal, which Connor Roberts answered with an empty-net goal late in the period.

Both teams put up big numbers the previous night in Guelph in Flint’s 7-5 victory.

The Firebirds stormed out to a 3-0 lead in the first period, beginning with Jack Wismer’s 12th goal of the season. Ethan Keppen registered a shorthanded goal, and just over a minute later, Brennan Othmann netted his 10th of the year.

Guelph completely flipped the script in the second period, with four consecutive goals.

The Storm also scored another in the third, going up 5-3, until Flint completely stole the momentum. Riley McCourt scored on the power play and then Riley Piercey drew even. A few minutes later, Dellandrea netted the game-winner at 17:13. Dellandrea added another in the empty net to finish it off.

Dellandera was named the OHL Player of the Week, the second time he has earned the honor this season. His six goals this week, along with four assists were just too good to overlook.

The Firebirds are now 26-17-1-1 for 54 points, leaving them in fifth place in the Western Conference. They’ll be at Windsor on Thursday then host Erie on Friday and Kitchener on Saturday.