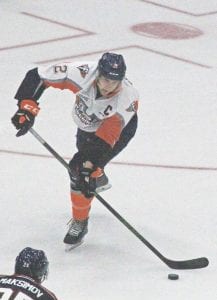 FLINT – After winning two of their first three games, the Ontario Hockey League’s Flint Firebirds picked up right where they left off this past weekend with another two victories, most recently a dramatic 5-4 overtime win over the Ottawa 67’s at the Dort Federal Event Center on Sunday.

With less than a minute remaining in the first period, Ryan Moore found Kole Sherwood wide open in the slot as Sherwood buried it for his third goal of the season. Sherwood then recorded an assist in the second period, getting control of the puck behind the net before feeding it to Nicholas Caamano out front. Caamano backhanded it in to give Flint a 2-0 lead.

Moments later, Chase Campbell cut into the Firebirds’ lead to give the 67’s their first tally of the evening, which was followed up by Moore stealing the puck on the penalty kill and coming all the way down the ice to score on a breakaway. Sasha Chmelevski added one more for Ottawa to make it a 3-2 Flint lead heading into the third.

Early in the final period of regulation, Luke Kirwan skated into the Ottawa zone and fired a shot that was stopped before scooping up his own rebound and firing it home for the two-goal lead. Drake Rymsha would get the 67’s back within one and Chmelevski added his second of the night to tie it up with less than three minutes remaining, forcing overtime.

In the extra frame, Sherwood and Kirwan would hook up on a pass in the slot before Kirwan was able to push it past Ottawa goaltender Olivier Lafreniere for the game-winner. In net, Connor Hicks stopped 31-of-35 shots sent his way.

At home on Saturday, the Firebirds began to look a bit dominant in a 7-4 win over the Sarnia Sting. Just 33 seconds into the game, Caamano came in on a breakaway after a nice feed from Moore and fooled Sarnia goalie Aidan Hughes for the game’s first goal.

Later in the opening frame, Ty Dellandrea fed the puck to Kirwan who buried it from the left faceoff circle to double the Flint lead. That is, before Sarnia began to roar back. Goals by Filip Helt and Troy Lajeunesse came less than a minute apart late in the first period to draw the Sting back to an even contest.

Just like in the first period, though, Flint got back to work early, scoring just 34 seconds into the second frame. Kirwan fired a shot from the point and Cullen Mercer tipped it in to take the lead back for the Firebirds. A bit later Caamano skated behind the back of the net and sent it to the front of the net where Sherwood would bury it for another two-goal advantage.

That lead ballooned to three when Mathieu Henderson skated into the slot and passed it to the right faceoff circle where Moore tickled the twine on a one-timer. Sarnia finally stopped the bleeding with a Jordan Ernst goal with just over a minute remaining in the second.

It took a while for the third period fireworks to get going, but near the midway point of the stanza, Jalen Smereck unloaded a slap shot from the blue line and Caamano tipped it in for a second three-goal edge. Sarnia would get another tally from Nikita Korosteleve before Sherwood put the game out of reach on a one-timer from Moore.

Hicks was in net for Flint and made 35 saves on 39 shots.

The Firebirds are currently tied for first place in the West Division, as well as the Western Conference and the OHL as a whole at 4-1-0-0 for eight points. Flint is back in action on Friday at the Mississauga Steelheads and Saturday at the Erie Otters.