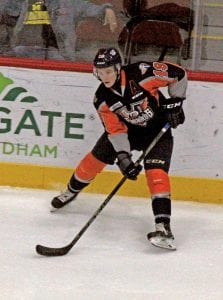 Flint’s Cullen Mercer looks to cycle the puck in the offensive zone.

North Bay went up 3-0 in the first period with goals from Kyle Potts, Justin Brazeau and Mike Amadio before Flint finally responded with less than two minutes remaining in the opening frame. Dane Johnstone got the puck behind the net and fed it to a wide open Jacob Collins in the slot. Collins buried it top shelf to try and chip away at the deficit.

Early in the second period, it seemed as if Flint was getting back into the game when Will Bitten scored on the power play just 3:06 into the middle stanza. That, however, would be Flint’s last momentum shift of the game as North Bay went on to score five unanswered goals. Zach Poirier and Max Kinslinger each scored in the second period while Brett McKenzie scored twice and Amadio once in the third.

The night before was just as tough for Flint in a 7-2 loss at home to the Kingston Frontenacs. Michael Dal Colle lit the lamp first late in the first period to give Kingston a 1-0 lead. The Frontenacs continued the momentum in the second as Ryan Verbeek and Lawson Crouse scored two minutes apart.

Flint finally broke the shutout with a Francesco Vilardi goal with less than four minutes remaining in the middle frame before Jared Steege made it a 4-1 game at 17:50. In the third, Crouse added back-to-back goals to record the hat trick and Spencer Watson put in another to extend the lead. Keenan Reynolds scored for the Firebirds at 13:32, his first as a Firebird.

In what was quite a back-and-forth battle, the Firebirds overcame a two-goal deficit at home on Wednesday to top the Saginaw Spirit in overtime, 6-5. The win gave the Firebirds the inaugural Coors Light I-75 Divide Cup, which is an annual rivalry trophy awarded to the team that wins the season series.

Flint would strike first in the game as Nicholas Caamano buried one on the power play at 10:16 of the opening frame. Saginaw fought back, though, scoring a power-play goal of its own just three minutes later. Late in the opening period came another big play for Flint as Zack Pittman stuffed the puck in from the front of the crease to put the Firebirds back on top.

Just a few minutes into the second stanza, Kris Bennett evened the score for Saginaw once more before Ryan Moore took the lead back for Flint at 14:09. Mitchell Stevens tied it up again just two minutes later to head into the final stanza knotted at three.

That’s when it seemed Saginaw was going to pull away as Michael Holmes gave the Spirit their first lead of the night and four minutes later Blake Clarke made it a 5-3 lead for the Spirit. That’s when the Firebirds went on one of their best runs of the season.

Bitten scored on the power play at the 10:54 mark and a couple of minutes later, on the power play once again, Luke Kirwan brought it back to a tie game. Eventually, the two goals forced the game into overtime.

Overtime was fast-paced, but didn’t see a goal until the final 37 seconds. Mathieu Henderson took a pass from Vili Saarijarvi in the slot and pulled a forehand-backhand move to fool Saginaw goaltender Evan Cormier, winning the game for the Firebirds.

Flint is now 19-37-4-2 for 44 points with six games remaining. They are still nine points out of the final playoff spot in the Western Conference behind the Saginaw Spirit. The Firebirds travel to Erie on Wednesday and Niagara on Thursday before returning home Saturday to host Kitchener.