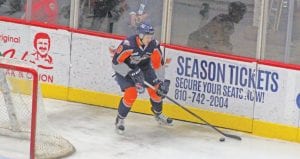 Flint’s Alex DiCarlo gains control of the puck behind the Firebirds’ net.

FLINT – The inaugural season of Flint Firebirds’ hockey came to an end at home on Saturday as Flint took its fifth loss in a row, falling to the Guelph Storm, 5-3. Flint got on the board first in front of a capacity crowd at the Dort Federal Event Center as Nicholas Caamano buried one at 12:14 of the opening period of the game.

Near the end of the period, though, Guelph drew even with a Givani Smith goal, and early in the second, the Storm took their first lead of the game thanks to Nicolas Sicoly. The Firebirds tied it back up just a few minutes later with Alex DiCarlo’s second goal of the year.

Moments later Jake Bricknell took the lead back for Guelph before Flint tied it once more later in the third with Ryan Moore’s 25th tally of the year. Garrett McFadden helped the Storm take the lead back in the third and CJ Garcia added an insurance marker.

Flint had a rough go of it on Friday at Sault Ste. Marie, suffering a 6-1 loss to the Greyhounds. The game was a scoreless deadlock until the final moments of the second period when Hayden Verbeek put the Hounds up 1-0.

In the third period is when the Soo went on an offensive explosion. Gutsav Bouramman doubled their lead before Morgan Frost made it 3-0. Blake Speers added one near the midway point of the period, followed by a Bobby MacIntyre goal just a few minutes later. Metamora native Jack Kopacka capped off the Greyhounds’ scoring with his 20th of the year.

Flint’s lone goal didn’t come until 17:30 of the third period from Luke Kirwan, his 10th of the season.

The Firebirds hit a couple of bumps in the road last Wednesday, beginning with not being able to get the ice frozen in time for their game with the London Knights. The contest was moved to Saginaw’s Dow Event Center as Flint suffered a 7-3 loss to London.

London scored early and often, beginning only 20 seconds into the game with a Victor Mete goal. Aaron Berisha added one later in the period and Chad Heffernan made it 3-0 late in the opening frame. Early in the second, Matthew Tkachuk buried his 28th of the year for the four-goal advantage, which quickly became a five-goal lead thanks to JJ Piccinich.

Flint finally stopped the bleeding late in the second when Stephan Seeger scored his fourth of the season. Seeger added another one near the midway point of the third to cut it to 5-2 before Tkachuk ripped the mesh once again. Kirwan recorded a goal for the Firebirds, which was followed by Piccinich’s second of the night.

In their first season in the Ontario Hockey League, the Firebirds finish up at 20-42-4-2 for 46 points, missing the postseason by 10 points. It is not known if the team will return to Filnt as the OHL took over control of the team in February after owner Rolf Nilsen fired coach Jon Gruden for the second time. The OHL is possibly seeking a new owner and Pistons’ owner Tom Gores was in the press box last week along with a few other unnamed interested parties. The fan support is there, it just depends if the OHL can come to terms with Nilsen over the franchise going forward after a very tumultuous inaugural season that included a player walkout after Gruden’s first firing.