Firebirds set back by winless weekend 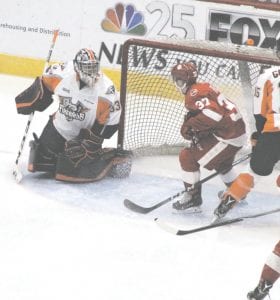 Flint’s Garrett Forrest reacts after making a save against the Sault Ste. Marie Greyhounds.

SAGINAW – The Flint Firebirds didn’t have the best weekend, most recently taking a 6-2 loss at the Saginaw Spirit on Saturday, which clinches the I-75 Divide Cup for Saginaw for the first time in the trophy’s existence.

Kyle Bollers scored early for Saginaw, but Kyle Harris and Connor Roberts quickly took the lead for Flint, as they hailed a 2-1 edge heading into the second period. Flint wouldn’t see the lead again after Bollers scored another just 42 seconds into the middle frame and then Cole Coskey added another for the Spirit late in the period.

Ryan Stepien, DJ Busdeker and Blade Jenkins all added tallies for Saginaw in the third stanza to pull away.

On Friday at the Sault Ste. Marie Greyhounds, an early lead slipped through the Firebirds’ hands in a 6-5 loss. Flint jumped on top quickly with goals from CJ Clarke and Jalen Smereck for the 2-0 lead after one period. The Greyhounds drew even after two, as Cole MacKay and Rasmus Sandin netted goals.

Ryan Roth gave the Greyhounds their first lead of the night early in the third, but Hunter Holmes drew even for Flint moments later. Sandin added his second of the night to put the Soo back on top, but Jack Wismer’s goal tied it back up for the Firebirds.

Tim Gettinger’s tally put the Hounds up once again, but again it was answered by Flint, this time from Ty Dellandrea. Barrett Hayton, though, scored with just 16 seconds left to put Flint away.

The Firebirds are still in fifth place in the West Division at 11-22-3-0 for 25 points. They’ll travel to Sarnia on Friday before hosting Erie on Saturday.