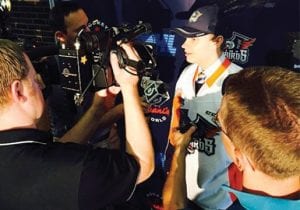 Vili Saarijarvi speaks to the media at a press conference at Dort Federal Credit Union Event Center last week regarding his signing with the Flint Firebirds.

Saarijarvi hails from Rovaniemi, Finland and was selected 73rd overall in the third round of the National Hockey League Draft by the Red Wings, who have decided they would prefer him to develop just an hour north in Flint. As far as his OHL rights go, Saarijarvi was selected by Flint in the Canadian Hockey League Import Draft.

“I want to thank the Firebirds organization for picking me in the (CHL) Import Draft and giving me an opportunity to play in one of the best hockey leagues in the world,” said Saarijarvi in a press release. “This is a first class organization and I could not be more excited to play in a hockey city like Flint.”

At first, it was unsure if the Firebirds would be able to land his contractual rights due to the fact that Saarijarvi was signed to play for a team in his native Finland. As it turned out, however, the decision was left up to him as he chose to play in Flint and be within driving distance of his future NHL home.

Saarijarvi was the Most Valuable Defenseman in the 2015 International Ice Hockey Federation U18 World Championships this past April, winning a silver medal in the process.

A year ago, Saarijarvi, who stands at 5-foot-10, 165 pounds, played in the United States Hockey League with the Green Bay Gamblers. He totaled six goals and 17 assists in 57 games with Green Bay.

In other Firebirds news, if you plan on attending the first home game in team history, you better act fast. It was announced last Friday that every seat in the arena has been sold for the Sept. 26 home opener against the Saginaw Spirit and only standing room tickets remain.

“The response to our public on-sale was incredible,” said Firebirds’ president Costa Papista in a press release. “Selling out our opening night seats in one week is a great indicator of community support for our project. We believe that Flint and Genesee County sports fans are truly ready to embrace the Ontario Hockey League.”

The sellout occurred 44 days before the puck drops on the Firebirds’ inaugural home contest. Standing room tickets are available at the Dort Federal Event Center box office or at ticketmaster.com.