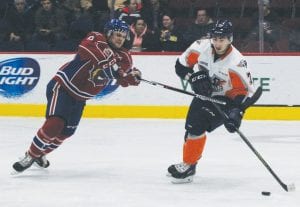 Flint’s Francesco Vilardi avoids a defender on his way out of the defensive zone.

FLINT — The Ontario Hockey League’s Flint Firebirds are continuing to show signs of being a first-year franchise on the ice, most recently dropping a 4-2 decision to the Sault Ste. Marie Greyhounds at the Dort Federal Credit Union Event Center in Flint on Sunday evening.

Flint, however, had its chances. In fact, the Firebirds led 1-0 late in the first period on a goal from Dane Johnstone, his fourth of the season. The second period would bring on a run by the Greyhounds that Flint would not be able to come back from.

Firebirds’ defenseman Mathieu Henderson scored his sixth of the year at 19:18 of the third to stop the bleeding, but there wouldn’t be enough time for Flint.

The Firebirds had a tougher time on Saturday night against one of the OHL’s best, the Windsor Spitfires. The 3,622 in attendance couldn’t help the Firebirds overcome being outshot 45-18 en route to a 6-2 loss.

Windsor seemed unstoppable, jumping out to a 4-0 lead before Flint would get on the board. Brendan Lemieux got the first goal and Hayden McCool helped the Spitfires go into the locker room with a 2-0 lead after one period.

Cole Carter and Aaron Luchuk then added another pair to extend the lead to four goals before Connor Chatham recorded his 11th goal of the year and final as a Firebird. Stephan Seeger added another for the Firebirds early in the third, but Luchuk and Bradley Latour shut the door on a potential comeback with two more third-period goals.

The reason it was Chatham’s last goal with the Firebirds is because he was shipped to Windsor on Sunday. Flint dealt Chatham and a second- and fourth-round pick in the 2017 OHL Draft in exchange for forward Luke Kirwan.

“It’s tough for us to let a guy like Connor Chatham go but we are building for the future,” general manager Terry Christensen said. “When Kirwan came into the OHL, he was projected as a top draft pick in the National Hockey League. We’re hoping that a new environment alongside John Gruden’s coaching will bring out the very best in Luke’s game.”

The Firebirds have dropped four in a row, falling back into last place in the West Division at 14-18-2-2 for 32 points, five points behind Saginaw.

The upcoming schedule will be tough, beginning with a Friday road game at the London Knights. The Firebirds return home on Saturday to face the Niagara IceDogs and former players Josh Wesley and Alex Nedeljkovic.