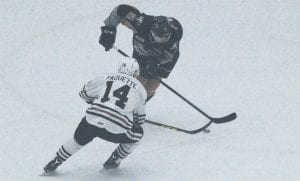 Flint’s Alex Peters tries to move around a defender.

KITCHENER, Ontario – Despite continuing to claw and fight in every game, the Flint Firebirds have now dropped 13 in a row, and 18 of their last 19, following Sunday’s 5-3 loss on the road to the Kitchener Rangers. Flint trailed 5-1 at one point, but nearly battled their way back into the game.

The scoring got started early when Kitchener’s Joseph Garreffa found the back of the net just 2:54 into the game. It didn’t take long for the Firebirds to draw even, though, tying the game up just 24 seconds later. Jacob Collins got the puck behind the Kitchener net and passed it to the front of the crease where Cullen Mercer scooped it into the top shelf.

The Rangers, however, would quickly shift the momentum back to their side with a pair of goals from Adam Mascherin and Gustaf Franzen to finish out the first period with a 3-1 advantage. Just 26 seconds into the second period, though, the Rangers upped their advantage with a goal from Dylan Di Perna, which was reviewed, but was determined a good goal.

Halfway through the period, Kitchener continued to pour it on with a Nick McHugh goal, which sent the Rangers into cruise control. Flint began to capitalize on that as Will Bitten pounded it across the goal line from the side of the crease, followed by a Dane Johnstone goal that was quite similar to Bitten’s less than a minute later.

Bitten would get one more chance in the third, hitting the post on a shot that would’ve brought Flint back to within one, but the Firebirds would never get another scoring chance of that quality.

At home on Saturday, Flint played another close game but couldn’t get the job done in a 3-2 loss to the Windsor Spitfires. The Firebirds grabbed an early lead when Nicholas Caamano scored on the power play just 2:47 into the game. It didn’t take Windsor long to respond, though, when Aaron Luchuk tied the game just five minutes later.

The game remained even until Windsor took control in the second period. Bradley Latour and Brendan Lemieux each scored in the first three minutes of the stanza for a little breathing room. Ryan Moore brought Flint back to within one in the third, and with less than a minute to go, the Firebirds had a scoring chance at the top of the crease but couldn’t cash in.

On the road on Thursday, Flint tried to climb out of a three-goal hole, and nearly did, before the Spitfires closed the door in a 5-3 loss for Flint. Windsor didn’t start quickly, though, as they scored just once in the first period with a Logan Brown goal at 7:34.

The second period, however, changed the pace of the game. Just four minutes in, Lemieux found the back of the net and at the 12:31 mark, Christian Fischer fired home a power play tally. Then the momentum began to shift in favor of the Firebirds.

Luke Kirwan lit the lamp with less than two minutes in the second frame before Vili Saarijarvi buried one just 1:34 into the final stanza, cutting the deficit to one goal. Flint’s momentum ended there, though, as Mikhail Sergachev and Latour scored for Windsor in the final period. Johnstone added a goal for Flint, but with only six seconds remaining, it didn’t have much impact on the outcome.

Flint remains in last place in the West Division at 12-26-3-2 for 33 points and now trails Saginaw in the standings by nine points. The Firebirds travel to Sarnia on Friday before coming home on Saturday for a rematch with the Sting.