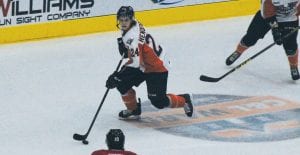 FLINT — The Ontario Hockey League’s Flint Firebirds returned to the Dort Federal Credit Union Event Center on Saturday after a four-game road trip. The home atmosphere couldn’t help turn around Flint’s current situation, though, as the Firebirds lost their fifth game in a row, 2-1, to the Owen Sound Attack.

The loss came despite the fact that Flint out shot Owen Sound, 33-26, and had several quality scoring chances, especially in the third period.

The Attack recorded the game’s first goal on the power play with just over a minute remaining in the opening period with a goal from Jonah Gadovic. Then, just :58 into the second frame, Owen Sound doubled their lead when Jaden Lindo rippled the mesh for the 2-0 advantage.

Flint’s lone tally came near the halfway mark of the final stanza as Cullen Mercer buried one off of a nice setup from Jacob Collins and Connor Chatham. Alex Nedeljkovic was in net and had a solid outing with 24 saves.

The Firebirds suffered their fourth loss in a row last Thursday in Windsor as they were shut out by the Spitfires, 3-0. It didn’t take much time for Windsor to get underway as Danill Vertiy fired one home just 2:17 into the game.

Then the game went into a goalless drought until the 9:49 mark of the third period as Mikhail Sergachev extended the lead to two before Vertiy added an insurance goal with less than seven minutes remaining.

Kyle Keyser was in net for Flint, stopping 26 of the 29 shots that came his way.

The day before, the Firebirds played a back-and-forth game in Saginaw, eventually falling to the Spirit for the first time ever, 5-3.

The game was played at 10:45 a.m. as a part of the Spirit’s Education Day; a matinee game that often fills the arena with school children on a field trip.

Flint’s Alex DiCarlo lit the lamp really quick, registering his first goal of the season just 1:16 into the opening frame. Saginaw took little time drawing even, though, with a Jesse Barwell goal at the 4:35 mark.

Then near the midway point of the first period, a power play led to Saginaw’s first lead of the game with a goal from Tye Felhaber. The Firebirds’ Dan Johnstone responded just minutes later and the game was a 2-2 draw heading into the intermission.

Then the Spirit ramped it up to another level. Matthew Kreis scored at 11:47 on the power play and Artem Artemov buried one just a few minutes later, also a power-play tally.

Kries found the back of the net once more in the third to make it a three-goal lead for the Spirit. Ryan Moore scored once more for Flint with just two minutes left in the game, but it wouldn’t be enough.

Flint has now fallen to 5-8-0-1 overall, still with 11 points. The five losses in a row have put the Firebirds in last place in the West Division. Flint, however, will get a chance to rebound with three games in a row this weekend.

The Firebirds will travel to Sarnia on Friday to face a Sting team that they’ve already beaten. Then on Saturday, Flint returns home to face the league’s worst team, the Guelph Storm, before a Sunday game with the defending Memorial Cup Champion Oshawa Generals.