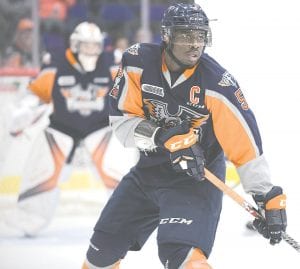 Flint’s Jalen Smereck has been called up to play for the AHL’s Tuscon Roadrunners.

FLINT – After completing his junior career with the Flint Firebirds last week, Jalen Smereck will now embark on his professional career. Smereck has a contract with the National Hockey League’s Arizona Coyotes, and they have elected to call him up to their American Hockey League affiliate, the Tucson Roadrunners.

Smereck joined the team on Tuesday, prior to Tucson’s game with the San Jose Barracuda. Smereck was the first Firebird in franchise history to sign a three-year entry level contract with an NHL team when the Coyotes signed in in October 2016.

“We wish Jalen the best of luck as he moves forward in his hockey career,” said Flint Firebirds Vice President of Hockey Operations & General Manager Barclay Branch. “Jalen was a great captain for the Firebirds, providing excellent leadership for our young players. The positive impact that Jalen had on our organization and community will be felt for years to come.”