Firebirds’ Smereck has air of confidence about him

BURTON – Regardless of his looming stature and the vivid pink Timberland boots he was wearing, Jalen Smereck, defenseman and captain of the Flint Firebirds, presented himself in a reserved manner. He has an air of stillness about him. Quiet, but polite. Tranquil, but no nonsense. Unworried and composed. Which could be construed as shy. But a shy man, a man unsure of himself, typically doesn’t wear pink Timberlands, a brand of boot that is synonymous with masculinity.

Except these aren’t just pink boots. They’re limited release Susan G. Komen Timberlands, proceeds from which directly contribute to breast cancer research. There’s a saying that “real mean wear pink.” Smereck takes it a step further, though, wearing pink for a purpose. It speaks to his character, something for which he has been noticed and lauded. At 20 years old, he is one of the older Firebirds players, and has become a beacon for both guidance and support for his teammates. It’s no wonder he’s recently been named captain. 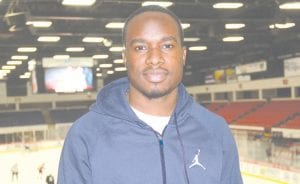 Jalen Smereck, 20, is a defenseman and captain for the Flint Firebirds.

Smereck, No. 5 for the Firebirds, says there’s a little more responsibility for him as a captain, explaining, “We’ve got a young team, so I gotta be the guy to make sure everyone’s ready to go. And if something goes wrong, that’s partly on me now. I’m another voice for the coaches, and I want to help spread their message and keep us on track.”

Although we’re in the year 2017, a time where race should no longer be a talking point, unfortunately, for Smereck, it remains. This is because hockey is not a sport known for its diversity. It’s also because he’s the Firebirds’ first black player, and, as of right now, their only. But this has no bearing on his performance or his attitude, and, as Smereck explains it, only serves as a benefit to him.

“For me, (my race) actually kind of helps,” he said matter-of-factly. “I’ve been made fun of and stuff, you know, but the bottom line is that I’m one of the only ones out there of my color. I stand out. So, I take that upon my shoulders and look at it in a positive way. That was a big thing for me, especially growing up, to make sure that I look at it as a positive instead of a negative. And it’s working.”

Smereck was raised in Detroit, and, along with his two older brothers, Joe and Dwayne, Smereck was encouraged by the boys’ father, Gary, to pursue their passion for ice hockey. The three brothers began their training in St. Clair Shores, honing their skills at Jack Adams Ice Arena. Though each of his brothers could hold their own on the ice, Smereck considers himself “the lucky one” who rose through the throngs of other young players surrounding him and proved himself to be potential NHL material.

So, what’s next for Smereck? Where does he go from here?

According to him, he’s got his sights set on maintaining a steady ascent to the top of the NHL. Last year, he became the first Firebird to sign a three-year entry-level NHL contract with the Arizona Coyotes, even playing in an NHL preseason game with the team.

He’ll head to the Coyotes’ main camp in August of this year. But for right, now, he’s focused on winning with the Firebirds, getting the “young team” back on the right track and enjoying the immense support he’s received from the community around him. He’s choosing to remain focused on preserving his humility and a level head.