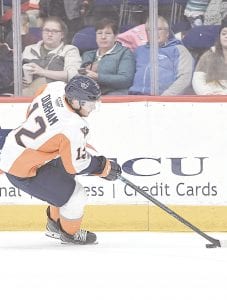 Flint’s Jake Durham had the game-winning goal during Sunday’s victory over the Sarnia Sting. Photo by Todd Boone

FLINT – The Flint Firebirds bounced back from a two-game losing streak by tackling the Sarnia Sting, 5-3, at the Dort Federal Event Center on Sunday. They also had to bounce back during the game, falling behind 2-0 early in the second period.

Connor Roberts rippled the mesh to cut the deficit in half, while Vladislav Kolyachonok was able to bury the equalizer. Early in the third, Kolyachonok then fired home the go-ahead goal, while Jake Durham’s power-play tally turned out to be the game-winner.

Sarnia cut Flint’s lead to 4-3 late in the third, but the Firebirds iced it away with an empty netter from Jack Phibbs.

Flint’s performance on Saturday wasn’t nearly as splendid in a 4-1 loss at home to the London Knights.

London took a 1-0 lead in the second period and then scored three times within less than four minutes in the third to make it a 4-0 contest.

Roberts tallied with only 26 seconds remaining, but the game was far out of reach.

Flint is currently fourth in the Western Conference at 16-10-0-0 for 32 points. The Firebirds will now hit the road for games at Barrie on Thursday, Sudbury on Friday and North Bay on Sunday.