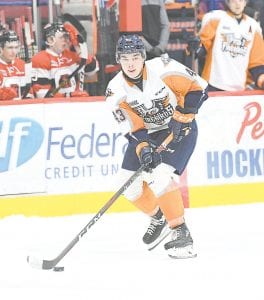 WINDSOR, Ont. – A pair of early Eric Uba goals weren’t quite enough for the Flint Firebirds in Saturday’s 6-3 loss at the Windsor Spitfires.

Uba gave Flint a 1-0 lead at the 6:30 mark of the opening frame, but Windsor knotted it back up a few minutes later.

Just 14 seconds into the middle frame, Uba struck again with his ninth of the season. However, Windsor tied it back up four minutes later, and moments after that, the Spitfires took their first lead of the game. Flint’s Ryan Bangs notched his first goal of the year to draw the Firebirds even once again, but Windsor added a pair of goals late in the second to pull ahead.

Another Spitfires’ goal in the third put the game on ice.

Friday yielded a more positive result in a 3-1 win over Windsor at the Dort Federal Event Center. Jake Durham gave Flint the initial lead late in the first period and the Spitfires’ only goal was the lone tally of the second stanza.

Fedor Gordeev took the lead back for the Firebirds at 12:34 of the third, while Durham added an insurance tally to pull away.

Still at the bottom of the standings, the Firebirds are currently 3-22-1-0 for seven points. They’ll be at Sarnia on Friday and host Erie on Saturday and Sault Ste. Marie on Sunday.