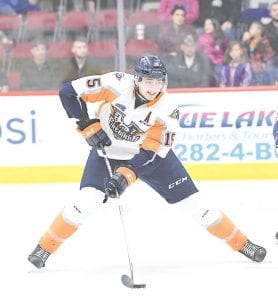 FLINT — The Flint Firebirds are beginning to get things back on track in the Ontario Hockey League, and even though their most recent game was a loss, they kept it close in a 5-4 loss to the Mississauga Steelheads at the Dort Federal Event Center on Saturday.

Flint took the initial lead with Jake Durham’s 10th goal of the season, the only tally of the first frame. The Steelheads pulled even early in the middle period, but the Firebirds came firing right back. Fedor Gordeev finally notched his first goal of the year and Ty Dellandrea added another just two minutes later to command a 3-1 lead.

Mississauga wasted no time getting back into the game, netting a pair of goals that were less than one minute apart. However, CJ Clarke took the lead back for Flint just moments later as the Firebirds led 4-3 heading into the third.

The Steelheads drew even on the power play and then netted another tally with the man advantage with less than a minute remaining to win the game.

Flint found a better result during a 4-2 win over the Sault Ste. Marie Greyhounds at home on Friday. Dellandrea got the Firebirds on the board with the first period’s only goal, which Soo responded to late in the second frame.

Early in the third, Durham got the edge back with the help of Ethan Keppen an Vladislav Klyachonok. Eric Uba added to the lead moments before the Greyhounds tallied their last goal of the night. Durham put one into the empty net for an insurance marker.

Flint continues to slowly improve, now sitting at 2-17-1-0 for five points, still at the bottom of the division. It hosts Saginaw on Wednesday before heading to Guelph on Friday and Owen Sound on Saturday.