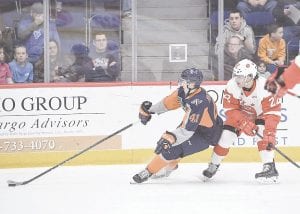 FLINT – As the season winds down, the Flint Firebirds of the Ontario Hockey League (OHL) have gotten better down the stretch, but in a 6-2 loss to the Peterborough Petes on Saturday at the Dort Federal Event Center, it wasn’t one of the easier nights of the year.

Peterborough jumped out to an early lead, but Flint drew even with a power play tally from Cody Morgan. Less than two minutes later, Ty Dellandrea gave the Firebirds their only lead of the night. The Petes tied it back up before the end of the period and then took over from there.

A 3-0 second period not only gave the Petes the lead back, it gave them quite a bit of breathing room as well, adding a cosmetic goal in the final frame.

Friday’s game was much different in a 3-2 win over the Kingston Frontenacs.

Kingston scored just 0:20 into the game, but Flint responded moments later with an Emmet Pierce tally. Jack Phibbs netted the go-ahead goal early in the second, while Hakon Nilsen’s goal later in the frame turned out to be the game-winner.

Kingston tallied late in the second, but could never find the equalizer. Between the pipes, Luke Cavallin made 30 saves.

Flint is now 12-45-5-0 for 29 points with only six games remaining. It hosts Owen Sound on Wednesday, travels to London on Friday and welcomes Windsor on Saturday.