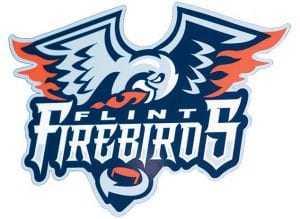 FLINT — The Flint Firebirds of the Ontario Hockey League welcomed the Peterborough Petes to town on Sunday afternoon, and although the game was quite exciting, Flint couldn’t finish off the Petes during a 6-4 loss.

Scoring was aplenty and began with Will Bitten continuing a tear from the night before, receiving a pass from Vili Saarijarvi in the slot and firing it into the back of the net to put Flint ahead. Not even two minutes later, though, Peterborough drew even on a Greg Betzold goal.

In the second period, Betzold tallied again to give the Petes the lead before Eric Cornel extended Peterborough’s edge to 3-1. In the third period, Flint’s Mathieu Henderson fired home a wrist shot from the face-off circle to cut the deficit, but the Petes’ Logan DeNoble made it a two-goal game once again.

Cullen Mercer was able to score on a tick-tack play in front of the net for another Firebirds’ goal, which was once again quickly responded to, this time by Josh Coyle at 11:46 of the third. Ryan Moore got Flint back into the game once more with a goal at 18:04, but the Petes’ Hunter Garlent put in the empty-net goal to finish the game off.

In front of 3,644 at the Dort Federal Credit Union Event Center on Saturday, the Firebirds put on quite a show en route to a 3-2 overtime victory over the Sarnia Sting. The excitement began at the 12:22 mark of the first period on the power play.

Bitten chipped one in from the side of the left post for an early 1-0 lead. Sarnia quickly responded with a power play goal of its own from Daniel Nikandrov.

Bitten, however, was just getting warmed up, adding another tally on a clear breakaway in the second period with less than four minutes remaining. Pavel Zacha evened the score for the Sting in the third period, sending the game to overtime.

That’s when things really began to get interesting. Bitten was flying into the Sarnia zone on a breakaway, and just as he attempted to shoot, he was tripped up by a Sting defender. The shot didn’t go through, however, Bitten was awarded a penalty shot. Bitten made a series of dekes before burying it to record his first OHL hat trick, sending the home crowd into a frenzy.

In between the pipes for Flint, goaltender Alex Nedeljkovic made his season debut for the Firebirds after recovering from an injury, stopping 27-of-29 shots.

At Sault Ste. Marie last Wednesday, the Firebirds lost a closely contested, back-and-forth game to the host Greyhounds, 4-3. The first period was a scoreless deadlock that saw the Firebirds kill off three penalties; until the final 2.5 seconds.

The Greyhounds came down on a rush in the final seconds of the opening frame as Gabe Guertier put one past goaltender Zack Bowman to give the Soo a 1-0 lead.

The second period, though, was just as exciting as the first frame ended. Flint won the opening faceoff, skated it into the Greyhounds zone and Connor Chatham found the back of the net just :12 into the middle stanza.

Flint wasted no time building on that momentum as Henderson scored the go-ahead goal just seven minutes later to give Flint the 2-1 edge. That lead, however, was short lived. Less than a minute later, Zachary Senyshyn added the equalizer for Sault Ste. Marie.

A couple of minutes later, the Greyhounds took the lead back with a Bobby MacIntyre goal at the 9:40 mark as the Soo headed back into the locker room with a one-goal lead once again.

The third period went scoreless for quite a while until Connor Sills rippled the mesh at 11:45 to draw Flint even. It seemed as though we might be looking at overtime when the Firebirds committed a costly penalty that led to a Soo power play goal with less than four minutes remaining in regulation from Guertier, his second of the night.

In between the pipes, Bowman made 25 saves on 29 shots and Sills earned third star of the game honors.

Flint now sits at 4-3-0-1 overall as they prepare for Friday’s home game against the Ottawa 67’s. It will be the