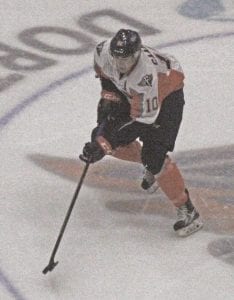 FLINT – So far in the 2016-17 Ontario Hockey League season, the Flint Firebirds have shown that the core of their roster is young but talented and that was on display throughout the weekend. Most recently, however, the Firebirds lost a 5-3 contest at the Dort Federal Event Center to the visiting Barrie Colts.

Ty Dellandrea gave Flint a 1-0 lead just 1:20 into the opening period with assists from Dennis Busby and Ryan Moore. Just a few minutes later, the Firebirds doubled their lead as Mathieu Henderson’s blast from the point was deflected into the net by Nicholas Caamano. Those would be the only two goals of the opening period.

Everything would change in the second period, though, as Barrie’s Anthony Stefano scored just 33 seconds into the frame. Eighteen seconds after that, Adrian Carbonara evened the score and at the 4:48 mark, Lucas Chido gave the Colts the lead, completely shifting the momentum in less than five minutes of play. Dellandrea would add another to tied it up after two periods.

The Colts would own the final frame as Jason Willms fired home his third of the year and Stefano picked up his second of the night for an insurance goal.

Hosting the Mississauga Steelheads on Friday, it was the tale of two completely different games that resulted in a 5-4 win for Flint. Luke Kirwan got the game’s first goal, picking the puck up in the slot and putting a nice deke on the goaltender for the 1-0 lead midway through the first.

Kirwan then buried his second of the night, scoring on a juicy rebound at the edge of the crease. Late in the first period, Everett Clark recorded his first of the season, firing it top shelf from the side of the net, giving Flint a 3-0 lead after one.

Just over a minute into the second period, Ryan Moore flew in on a breakaway and put it through the five-hole to make the lead even larger. About five minutes later, the lead ballooned to a five-goal advantage as Cullen Mercer scooped the puck in from the front of the crease.

That is when the game completely changed. Owen Tippett would get Mississauga’s first goal late in the second period, and early in the third, Sean Day cut into the deficit with a goal of his own. Tippett buried another near the midway mark of the third and the Steelheads climbed all the way back to within one goal on a tally from Brendan Harrogate. That, however, was too little, too late.

On Thursday, Flint fell into a 4-0 first period hole which would eventually lead to a 7-2 loss on the road to the Windsor Spitfires.

In fact, Windsor’s Logan Brown rippled the mesh just 1:04 into the game while Luke Boka would double the Spitfires’ lead just three minutes later. Brown would then register an amazing feat with a first period hat trick, scoring at 10:08 and following it up with another tally just 35 seconds later.

It seemed like the onslaught was never going to stop until Moore finally stopped the bleeding with a wrist shot from the top of the face-off circle with less than a minute remaining in the opening period to cut it to a 4-1 deficit.

The second period would prove to be almost as difficult for Flint, beginning with a Jalen Chatfield goal 6:43 into the frame. Jeremiah Addison then increased the lead to 6-1 just a few minutes later. Kole Sherwood would put up Flint’s final goal with a long wrist shot that found its way in later in the second period.

Aaron Luchuk scored the final goal of the game with just over a minute left in the second. The third period would go scoreless. Connor Hicks had a tough night in net for the Firebirds, stopping just 13 of Windsor’s 20 shots.

The Firebirds are now 5-4-0-1 for 11 points, putting them at fourth in the West Division and sixth in the Western Conference. Flint will now play three games in three nights this weekend, beginning with a trip to Sault Ste. Marie on Friday. They then return home for games against Windsor and Kingston on Saturday and Sunday, respectively.