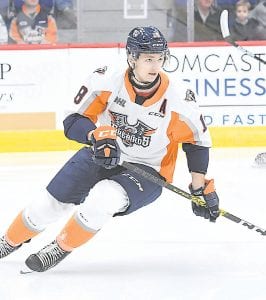 Flint’s Vladislav Kolyachonok netted his fifth goal of the season during Saturday’s loss to Ottawa. Photo by Todd Boone

FLINT – A 4-2 loss wasn’t what the Flint Firebirds were hoping for in Saturday’s contest against the Ottawa 67’s at the Dort Federal Event Center.

The first period seemed as if it would go by without a score, but Ottawa got on the board with 13 seconds left in the frame.

Evgeniy Oksentyuk knotted things up at 1-1 at the 8:14 mark of the second, the only goal in the period.

The 67’s scored a pair of goals in the first 6:56 of the final period to make it a 3-1 game before Vladislav Kolyachonok cut the deficit to one with his fifth tally of the season. However, Flint would be unable to draw even again and Ottawa iced it with an empty netter.

The Firebirds really made a statement on Friday, dominating the London Knights 6-1 at London. Flint had previously never won a regulation game in London, which is regarded as one of the toughest places to play in the Ontario Hockey League due to its large arena and fan base.

Flint’s Dennis Busby buried the only goal of the opening period, which the Knights answered early in the second to tie things up.

After that, it was all Firebirds. Jack Phibbs scored just moments later, followed by Ty Dellandrea’s eighth of the season. Jake Durham’s tally gave Flint a 4-1 lead heading into the third period. Oksentyuk then had a career period, scoring at 7:43 before putting home the empty-net tally.

The Firebirds are now third in the Western Conference at 13-7-0-0 for 26 points. They’ll travel to Sarnia on Wednesday and host Sault Ste. Marie on Friday and Owen Sound on Saturday.