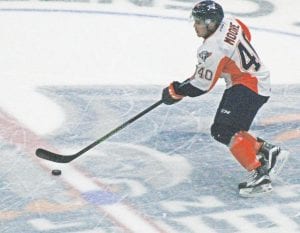 Flint’s Ryan Moore skates the puck across the Firebirds’ logo at center ice.

FLINT – After a four-game road trip came to an end, the Flint Firebirds returned to the Dort Federal Event Center on Saturday to face a strong Sault Ste. Marie Greyhounds squad. Flint battled but couldn’t overcome a first period storm crafted by the Greyhounds with Soo heading back north after a 5-3 triumph over Flint.

The initial lead actually belonged to the Firebirds as Nicholas Caamano buried his eighth of the season right in front of the crease, assisted by Ryan Moore and Kole Sherwood. Then the tone of the game completely changed in less than a minute.

Zachary Senyshyn evened things back up for the Greyhounds and then Morgan Frost gave Soo the lead at the 12:03 mark. A couple of minutes later, it was Calvin Martin making it a two-goal advantage before Hayden Verbeek’s goal ballooned the lead to three; and that was before the first period ended.

Caamano would get another early into the second period, jamming it home after scooping up a rebound from a Luke Kirwan shot. Then early in the third, Flint drew to within one. Dane Johnstone skated into the offensive zone and sent a cross-ice pass to Moore, converting on the one-timer and giving the Firebirds a shot at a comeback.

That comeback would be halted, though, as Bobby MacIntyre scored an empty-net goal to finish the win for the Soo.

Friday was a different story, as Flint traveled to Kitchener and shocked the highly-powered Rangers in a 3-2 win. Kitchener jumped out to a 1-0 lead late in the first period as Adam Mascherin tallied his 10th of the year.

The second stanza would be all Firebirds, though. Moore fired one into an open net after Caamano stole it from the Rangers’ goaltender, who misplayed the puck outside of his crease.

Moments later, Sherwood skated into the zone, deked a defenseman twice and sent it over to Moore. Moore passed it right back and Sherwood connected on the one-timer for a 2-1 lead.

Alex Peterson made it a deadlock once again near the midway mark of the second period, but a few minutes later, Flint capitalized for a game-winning tally. Jalen Smereck fired the puck from the blue line and Hunter Holmes got it near the crease and scooped it over the goaltender’s head to give Flint a huge upset win. Garrett Forrest had a big day in net with 32 saves.

Flint currently sits at fourth in the West Division, and eighth in the Western Conference with a mark of 9-8-0-1 for 19 points. The Firebirds will host Peterborough on Friday and Windsor on Saturday.