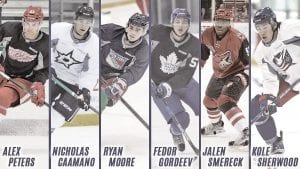 FLINT – As hockey season draws closer, the National Hockey League teams are holding development camps to get a closer glimpse at their future prospects, which includes six current and former Flint Firebirds.

Nick Caamano is in camp with the Dallas Stars, Fedor Gordeev is with the Toronto Maple Leafs, Ryan Moore with the New York Rangers, Alex Peters with the Detroit Red Wings, Kole Sherwood with the Columbus Blue Jackets and Jalen Smereck with the Arizona Coyotes.

Moore led Flint in points a year ago with 39 goals and 51 assists and is currently in the Rangers’ camp as a freeagent invite. Peters was a former thirdround pick of Dallas, but is now a free agent in Detroit’s camp. The only captain in Firebirds’ history, Peters’ days in Flint are now over as he has surpassed the age limit to play in the Ontario Hockey League.

Detroit native Smereck inked a threeyear entry-level contract with Arizona back in October and has been a great addition to Flint’s roster. He racked up nine goals and 36 assists a year ago. Sherwood was also a key acquisition for Flint with 33 goals and 52 assists. He also has a three-year entry level contract, which he signed with Columbus in 2015.

There are also several former Firebirds currently belonging to NHL squads, including Will Bitten with the Montreal Canadiens, Connor Chatham with the New Jersey Devils, Brent Moran in Dallas, Alex Nedeljkovic with the Carolina Hurricanes, Vili Saarijarvi with Detroit and Josh Wesley with Carolina.