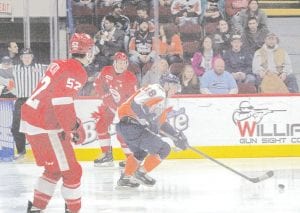 Flint’s Matyas Kantner skates the puck into the offensive zone.

LONDON, Ontario – In London on Monday afternoon, the Flint Firebirds got down early before clawing their way back. Unfortunately, their comeback was nullified in a 5-2 loss to the Knights in front of 9,046 fans at Budweiser Gardens.

London wasted no time attacking the net as Mitchell Marner scored just 1:12 into the game. A little later in the period, Marner buried another one on the power play to put Flint in an early two-goal hole. Then the Firebirds began to turn things around.

Luke Kirwan scored his sixth of the year at 13:36 of the opening period to cut the deficit in half. No one was able to find the back of the net in the second period, but less than five minutes into the third, Flint drew even with Nicholas Caamano’s 18th goal of the season.

That, however, is when Flint’s momentum ran out. Christian Dvorak took the lead back for London less than two minutes later, and only a couple of minutes after that, an Aaron Berisha goal rebuilt London’s two-score lead. A bad play in the defensive zone by Flint then led to Matthew Tkachuk netting the empty-net goal at 18:48.

On Saturday in Flint, it seemed as though the Flint Firebirds were going to put together their first winning streak in months before losing a pair of two-goal leads and getting outscored 4-1 in the final frame to lose 5-4 to the Owen Sound Attack.

After a scoreless first, Owen Sound found the back of the net just 1:32 into the second period on a goal from Bryson Clanfrone and that lead held for 11 minutes. That is, until Connor Sills made a nice move to fool the goaltender and even the score. Moments later, Cullen Mercer got a similar opportunity and fired it home to give Flint the lead.

Will Bitten then buried a power-play goal for the Firebirds with less than three minutes remaining in the second period to add to the edge. Owen Sound began to fight back, though, in the third, beginning with a Nick Suzuki goal at 1:59. Ryan Moore put Flint’s lead back to two goals at 8:06, but Flint’s highlights ended there.

Owen Sound would go on to score three unanswered goals, starting with a Jacob Busch tally just 12 seconds after Moore’s goal. Jonah Cadjovich added one and Suzuki picked up his second of the night, which turned out to be the game-winner.

The night before, however, the Firebirds shocked the world by winning on the road against the Canadian Hockey League’s No. 4-ranked team, the Kitchener Rangers, 3-2. Bitten helped Flint grab an early lead just 3:06 into the game, his 22nd of the season.

Early in the second period, though, Kitchener responded with a Jeremy Bracco goal, which Moore followed up with a power-play tally to put the game back in Flint’s favor just 2:37 later. Mercer would get an empty-netter late in the third before the Rangers got a Ryan MacInnis goal with just 33 seconds left. They wouldn’t be able to find the equalizer, though, allowing Flint to pull off its biggest upset of the season.