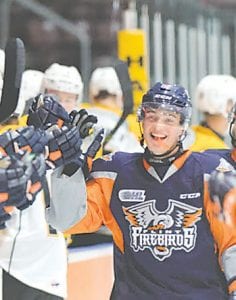 FLINT – The Flint Firebirds’ season hasn’t started in ideal fashion, remaining win-less after a 4-2 loss to the London Knights in Saturday’s home opener at the Dort Federal Event Center.

Flint quickly fell behind 2-0 in the first period before Jake Durham responded to cut the deficit in half. However, London added one more goal before the end of the period to once again take a two-goal lead. Ethan Keppen’s goal late in the second period brought the Firebirds back to within one, but the Knights added an empty net goal late in the third to pull away.

Friday’s game at the Sarnia Sting didn’t favor Flint, either, in a 4-1 loss.

The game started off on the right note, as rookie Jacob Winterton netted his first career goal in the Ontario Hockey League less than six minutes into the game.

The youthful Firebirds sit in last place in the West Division at 0-4-0-0. They host Saginaw on Wednesday and Guelph on Saturday.