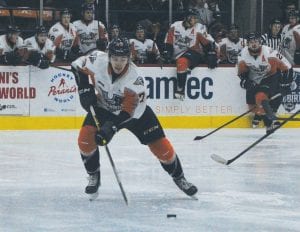 SARNIA, ONT. — The Flint Firebirds hit the road on Sunday for a key West Division contest, and despite a valiant comeback, dropped their fourth consecutive game with a 5-2 defeat at the hands of the Sarnia Sting.

Sarnia opened the scoring near the midway point of the opening period with Ryan McGregor’s fourth goal of the season. The score remained 1-0 for quite a long time until Flint’s Connor Chatham found the back of the net with less than a minute remaining in the second period.

The third period, though, saw a scoring eruption. Matt Mistele took the lead back for Sarnia before Flint’s Stephan Seeger tallied his first goal of the year to draw even once more. Then the game went completely in Sarnia’s favor.

Jeff King scored a shorthanded goal at the 11:08 mark, followed just two minutes later by a goal from Jordan Kyrou. Hayden Hodgson added an insurance marker with less than a minute remaining, finishing off the win for the Sting.

At the Dort Federal Event Center on Friday, Flint welcomed the Mississauga Steelheads as a part of Ugly Sweater Jersey Night. Not only that, it was the return of Ryan McLeod, Flint’s No. 1 overall pick in the Ontario Hockey League draft, who refused to play for Flint and was eventually granted a trade to play for his hometown Steelheads alongside his brother, Michael.

Despite all of that, it turned out to be a tough night for the Firebirds with a 3-0 loss to the Steelheads. With just a few minutes remaining in the opening stanza, Nathan Bastian fired home a power-play goal for Mississauga, the only goal of the period.

Michael McLeod, however, scored at 8:32 of the second, and to add insult to injury for Flint, Ryan McLeod tallied the empty-netter with less than a minute remaining in regulation to put Flint away.

After a stretch in which Flint won seven of 10 games, the Firebirds have now fallen in four straight contests and have dropped back to fourth place in the West Division at 13-14-1-2 for 29 points.

Flint continued the second part of a four-game road trip on Wednesday, following VIEW deadlines, at the Saginaw Spirit before road games at Oshawa on Friday and Hamilton on Saturday. The Firebirds will host Hamilton on Tuesday, Dec. 29 on college night, where a valid college ID will get you $2 off admission. There will also be $2 hot dogs and beers at the game.