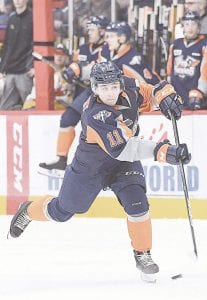 Flint’s Dennis Busby fires a shot during a game with the Sarnia Sting. Photo by Todd Boone/Flint Firebirds

FLINT – It was not an easy contest to deal with when the Flint Firebirds swallowed an 8-1 loss to the Guelph Storm at the Dort Federal Event Center on Saturday.

The Storm started the scoring 1:43 into the game and went into the first intermission with a 4-0 lead.

Just 1:59 into the middle frame, Guelph pushed it to a 5-0 lead before Flint finally got on the board. Jake Durham buried his 35th goal of the year from Dennis Busby and Hunter Holmes on the power play. Guelph added another in the final minute of the second before putting up a pair of cosmetic goals in the final stanza.

Flint now stands at 11-44-5-0 for 27 points and hosts Kingston on Friday and Peterborough on Saturday.