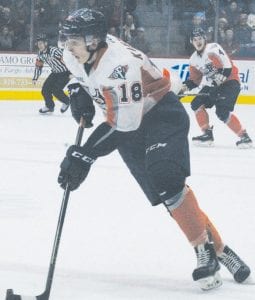 NORTH BAY, Ontario — After putting together three consecutive wins, the Ontario Hockey League’s Flint Firebirds saw their run come to an end on Sunday afternoon with a 6-3 road loss to the North Bay Battalion.

The first period didn’t go well for Flint at all. Mike Amadio scored for North Bay just 4:02 into the contest and it began to pile up from there. The Battalion’s Mathew Santos then went on a run of his own, scoring a shorthanded goal at the 13:15 mark before adding another tally with just over a minute remaining in the opening period.

That’s when the Firebirds started to turn things around, though, beginning with a Francesco Vilardi goal late in the second period. Near the midway point in the third, Vilardi connected again to bring Flint within one.

North Bay’s Max Kislinger quickly extended the lead back to two just two minutes later before Will Bitten brought Flint back to within one just a minute and a half after that, capping off a three-goal tear in just over three minutes.

Amadio, however, netted a power-play goal that put the game out of reach for Flint, followed by a Brett McKenzie empty net tally, icing the win for the Battalion.

That win streak reached its peak on Saturday night with a road win over the Sudbury Wolves, 2-0, despite Flint being outshot 43-21. That was backstopped by the goaltending of Alex Nedeljkovic, who stopped all 43 shots to record his first shutout in a Firebirds’ uniform.

Connor Chatham lit the lamp on the power play at 9:59 for his sixth goal of the season, which would be the only score until the third period. That’s when Cullen Mercer buried an empty netter to put the game away.

Over 3,300 turned out to see the fourth edition of the Flint Firebirds-Saginaw Spirit rivalry at the Dort Federal Event Center on Wednesday as Flint erased a rough start to take a 4-2 win. The victory puts the Firebirds up 3-1 in the eightgame I-75 Divide Cup series.

Saginaw struck first and very quickly. Kris Bennett buried a shot just 1:05 into the game to put the Spirit ahead as they looked to snap a six-game losing streak. That wasn’t going to happen, however, as Flint went on a three-goal tear.

Josh Wesley evened things up with a slap shot from the blue line, assisted by Mathieu Henderson and Vilardi, at the 5:47 mark for the final goal of the first period. Late in the second frame, though, a power-play goal from Connor Sills put the Firebirds ahead. The power-play tally got helpers from Wesley and Zack Pittman.

The score would remain the same until Chatham found the back of the net near the midway point of the third period. Chatham’s goal was set up by Henderson and Bitten on the power play.

Just moments later, though, a Saginaw power play got the Spirit right back into the game. Artem Artemov rippled the mesh and made it a one-goal game as the Spirit desperately battled for their first win in a couple of weeks.

Mercer then shut the door on that effort, putting an insurance goal past Saginaw’s Evan Cormier with help from Chatham and Zach Grzelewski with just minutes remaining in regulation, sealing the win for Flint. In net, Nedeljkovic made 21 saves to secure the win.

In the standings, Flint has moved up to third place in the West Division with a record of 12-11-1-1, totaling 26 points, just two points behind second-place Sarnia. Flint is at the Windsor Spitfires on Thursday before welcoming Saginaw to town on Friday and Sarnia on Saturday.

Friday will be teddy bear toss night as fans are encouraged to bring a teddy bear to throw on the ice after Flint’s first goal. Saturday night will be Star Wars night as the Firebirds will wear commemorative Star Wars jerseys featuring the character Yoda. The first 2,000 fans in attendance will receive a free light saber. Both contests will face off at 7:30 p.m. at the Dort Federal Event Center.