Firebirds to raise money for Humboldt at camp 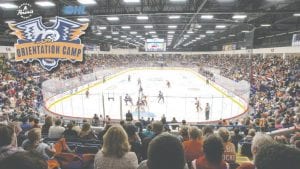 FLINT – The Flint Firebirds will be hosting their annual orientation camp this weekend, welcoming more than 30 prospects to town, as well as their families, most of which have never visited the Flint area. There will be three intra-squad scrimmages, culminating in the Blue vs. White game on Saturday at 3:30 p.m. at Iceland Arena.

The event has been known to pack the building as a barbecue is scheduled for 2 p.m., and following the game, there will be a player meet and greet until 6 p.m. Although the event is free, a $5 donation is suggested to help benefit the families, victims and survivors of the Humboldt Broncos’ tragedy.

The Broncos are a junior hockey team in the Saskatchewan Junior Hockey League. Recently, their team bus was involved in a terrible car accident that took the lives of more than a dozen players and coaches and injured many others.

Flint put two more prospects on its radar last Wednesday by picking up a pair of young forwards. Flint selected Markus Patterson in the first round, second overall, and Russell Oldham in the second round, No. 22 overall.

“We are very pleased with our two selections in the U-18 Priority Selection Wednesday,” said Flint Firebirds Vice President of Hockey Operations & General Manager Barclay Branch. “We’d like to welcome both Markus and Russell to the Firebirds and look forward to seeing both of them compete for spots on our hockey club moving forward.”

“The Under-18 Priority Selection is to the benefit of players who may take some extra time in their overall hockey development,” said Joe Birch, OHL Senior Director of Hockey Development and Special Events. “The long-term hope remains that this initiative will bring accomplished players to the OHL, but also grow the exposure of Midget AAA hockey within the province and help the development of this important level for players, goaltenders, and coaches.”