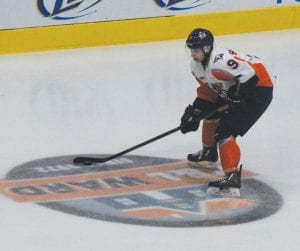 Flint’s Vili Saarijarvi moves the puck through the neutral zone against Peterborough on Oct. 11. Saarijarvi scored twice in Friday’s win over Ottawa.

FLINT — It doesn’t seem to have taken too long for the Ontario Hockey League’s Flint Firebirds to gel as a team, and on Friday, the scoring finally exploded as Flint cruised to a 7-4 win over the Ottawa 67’s in front of 3,452 fans at the Dort Federal Credit Union Event Center.

The game was a Pink Out, promoting breast cancer awareness and the Firebirds even wore commemorative pink jerseys that were auctioned off following the game.

Flint wasted no time getting to work on the ice, though, putting up a fivegoal first period. It began just 1:28 into the game as captain Alex Peters scored unassisted. Ottawa responded at 8:43 with a goal from Jeremiah Addison before the Firebirds began to light up the scoreboard.

Vili Saarijarvi would tally on the power play at 11:40 before Jacob Collins scored his first goal of the season to put Flint on top 3-1. Josh Wesley found the back of the net at 14:21, Connor Chatham rippled the mesh at 17:33 to give Flint a commanding 5-1 advantage at the end of the first.

The Firebirds didn’t stop there, though, as Francesco Vilardi scored his first of the season to make it a 6-1 game before Ottawa went on a threegoal tear to make it a somewhat competitive game once again.

Evan de Haan started the scoring streak for the 67’s at 13:47 of the second stanza and Jacob Middleton added another tally at 15:11 on the power play. The final goal for Ottawa came just 4:27 into the third period from Sam Studnicka.

The Firebirds decided the lead wasn’t enough, though, and Saarijarvi fired home one last goal, his second of the night, on the power play with assists from Mathieu Henderson and Will Bitten.

Alex Nedeljkovic was in net the entire game, stopping 29 of the 33 shots Ottawa fired his way. Flint is now 5-3-0-1, good enough for 11 points, putting them third in the west division behind only Sarnia and Windsor.

The Firebirds will now embark on a four-game road trip, beginning on Thursday in Barrie. Flint then travels to Owen Sound on Oct. 24, Saginaw on Oct. 28 and Windsor on Oct. 29. Flint won’t be back to the Dort Federal Event Center until Oct. 31 against the Owen Sound Attack.