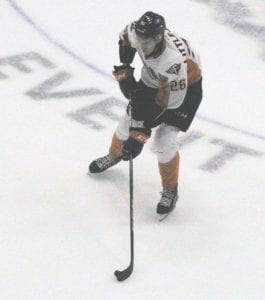 Flint’s Ryan Littlejohn lugs the puck through the neutral zone against Ottawa on Sept. 30.

FLINT – The Flint Firebirds of the Ontario Hockey League staged an epic third-period comeback that led to a 4-3 shootout victory over the Erie Otters Saturday at the Dort Event Center. The game was definitely a treat for the 3,807 in attendance.

Ethan Keppen got the first goal to give the Firebirds a 1-0 lead. After that, things changed drastically. Stephane Patry evened things up just 22 seconds later, and in the second period, Maxim Golod and Joseph Mack put Erie up 3-1.

Flint regained the momentum in the third period when Maurizio Colella buried a power-play goal and Jack Wismer netted the equalizer just moments later. The overtime period would not be enough to finish off the game, so Colella netted another goal in the shootout. Flint wasn’t done, though, and Nicholas Mattinen fired home the shootout winner.

Luke Cavallin got the win with 19 saves in net.

Friday’s game at the Sarnia Sting was not so exciting for Flint which dropped a 7-1 decision.

Jordan Ernst, Sean Josling and Franco Sproviero crafted a 3-0 lead for Sarnia before Wismer finally put Flint on the board at 13:02 of the middle stanza. That had little impact on the game, though, as Ryan Mcregor, Josling Sproviero and Hugo Leufvenius all tallied goals in the third period.

Flint now sits at fifth place in the West Division at 12-23-3-0 for 27 points. It’ll now hit the road to Oshawa on Friday, Hamilton on Saturday and Erie on Sunday.