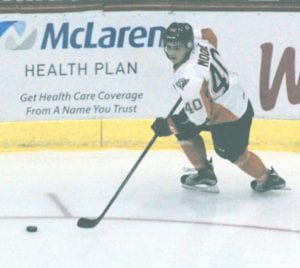 Flint’s Ryan Moore scoops the puck up in the corner.

FLINT – The Flint Firebirds gave the home fans something to cheer about on Saturday in front of a near-capacity crowd at the Dort Federal Event Center with a 4-3 win over the Hamilton Bulldogs. The Bulldogs coming to Flint set the return of former Firebirds’ head coach John Gruden, as well as forward Will Bitten.

It took only one minute for Flint to jump on the board when Ryan Moore caught a tipped puck out of mid-air, set it back down and fired a wrist shot in. Flint would end the opening period with a 2-0 lead after Jalen Smereck’s wrist shot from the point was deflected in at the top of the crease by Nicholas Caamano.

That’s when Hamilton began to fight back, getting the only goal of the second period from Niki Petti and Connor Roberts would get the equalizer early in the third. A few minutes later, Maurizio Colella grabbed the lead back for Flint, finding himself wide-open near the post and converting on a perfect pass from Moore.

Later in the frame, Caamano outskated the whole defense and put one into the top shelf to make it a two-goal game once again. Hamilton’s Justin Lemcke would add another moments later, but Hamilton wouldn’t be able to pull even again.

On Friday at the Sarnia Sting, Flint couldn’t seem to gain any traction in a 6-1 loss. The Firebirds had the first goal of the game as Jack Phibbs skated in all alone and made a series of beautiful moves to beat the goaltender for his first career Ontario Hockey League goal.

After that, the floodgates opened. Sarnia’s Jeff King tied it with less than 10 seconds remaining in the first and Sean Josling added one early in the second to give Sarnia the lead. Troy Lajeunesse, Anthony Salinitri and Adam Ruzicka all scored in the second also to make it a 5-1 lead and Josling got his second of the night in the third period to put it away.

Flint is now in a tight race for the playoffs with 21 games remaining, standing at 22-21-1-3 for 48 points, just six points behind Sarnia and only two ahead of Saginaw for fourth place in the West Division and eighth place in the Western Conference.

The Firebirds are in Guelph on Friday and host Kitchener on Saturday.