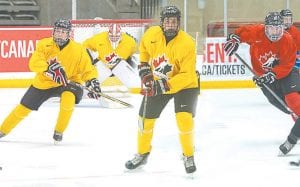 CALGARY – Three of the Flint Firebirds have performed exceptionally at the Canadian national under-17 development camp, which took place July 21-27 at the Markin MacPhail Centre at WinSport’s Canada Olympic Park in Calgary.

Flint was represented by Michael Bianconi, Owen Power and Evan Vierling. In all, 111 skaters took part in the camp and Bianconi and Vierling ended the week tied for seventh among all of the players and were able to average a point per game.

Vierling registered a pair of goals, one on the power play, and one assist in the three games and Bianconi rippled the mesh once and came up with a pair of helpers. Power was strong on the defensive end and had a point and two penalty minutes in the three games.

Flint selected all three players in the first three rounds of the 2018 OHL Priority Selection. The camp consisted of 12 goaltenders, 36 defenseman and 63 forwards being divided into six teams for various forms of training, as well as games.

“The national under-17 development camp provides a unique opportunity for players to learn about what it takes to be part of Team Canada alongside the best young talent in the country,” said Shawn Bullock, Hockey Canada’s senior manager of hockey operations and men’s national teams. “The players are here with the ultimate goal of wearing the Team Canada jersey in international competition, and we are supporting them in that goal by providing the on- and off-ice experiences