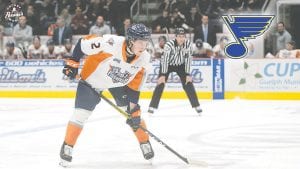 ST. LOUIS, MO. — Flint Firebirds’ defenseman Tyler Tucker realized a dream on Monday, signing his first National Hockey League contract. Tucker agreed to a three-year entry-level contract with the St. Louis Blues, the squad that selected him in the seventh round, 200th overall, in the 2018 NHL Draft.

“On behalf of the Flint Firebirds’ organization, we want to congratulate Tyler and his family on signing with the St. Louis Blues,” said Flint Firebirds Vice President of Hockey Operations & General Manager Barclay Branch. “Tyler’s hard work and commitment has paid off and we could not be happier for him.”

Tucker has racked up 55 points, including 17 goals and 38 assists, in 52 games this season. He also has a plus-10 rating and 83 penalty minutes. On Feb. 17, he broke franchise records for most points in a single game with seven and best plus-minus rating in a single game at plus-8.

A former first-round pick of the Barrie Colts, Tucker was acquired by Flint on Jan. 7.