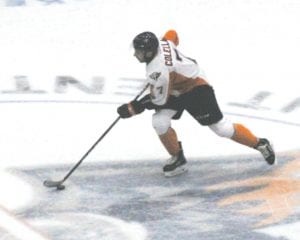 Flint’s Maurizio Colella lugs the puck through the neutral zone during the home opener against Ottawa.

OTTAWA, Ont. – Sunday’s game at the Ottawa 67’s marked the third loss in a row for the Ontario Hockey League’s Flint Firebirds in a 4-3 overtime contest. Flint fell behind early after Ottawa registered a pair of first-period goals from Graeme Clarke and Sam Bitten. Maurizio Colella cut the deficit in half in the second period, but Ottawa’s Tye Felhaber put it right back to a two-score game in the third.

That’s when Flint revved up the offense, beginning with Colella’s second of the night. Hunter Holmes would get the equalizer, his third of the season, sending the game to overtime. The game nearly reached a shootout until Ottawa’s Nikita Okhotyuk scored with just 15 seconds remaining.

Friday’s game in Kingston wouldn’t be quite as close, but the Firebirds dropped a 6-3 decision to the Frontenacs. Ty Dellandrea put Flint up 1-0 rather quickly, but Kingston responded with a Sam Field goal midway through the first.

Brett Neumann then put the Frontenacs on top with an early second-period goal. Veteran Ryan Moore notched his first of the season to tie things up, but Kingston’s Eemeli Rasanen put Kingston up 3-2. That lead doubled in the third when Field scored his second of the night. Max Kislinger got it across the goal line to get Flint back within one, but Neumann and Jason Robertson’s goals put the game away.

After winning all of their first three games of the regular season, the Firebirds were finally defeated for the first time on Thursday at the Peterborough Petes, 3-1. The game wasn’t in the Firebirds’ favor from the opening faceoff.

Peterborough grabbed an early lead with a Logan DeNoble goal midway through the first period before Adam Timleck made it 2-0 just 30 seconds into the second period. Jonathan Ang upped the lead to three at the 11-minute mark of the third stanza.

Jake Durham was the one to net Flint’s only goal just 40 seconds later, but it wouldn’t help the Firebirds overcome the deficit. Despite the loss, goaltender Garrett Forrest had to made a stunning 47 saves to keep Flint in the game.

Flint sits at 3-2-1 for seven points, putting it in fourth place in the West Division. The Firebirds begin a homestand series this week, hosting Guelph yesterday, following press deadlines, Mississauga on Saturday and Kitchener on Sunday.