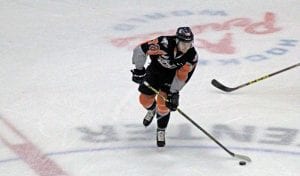 FLINT – The Flint Firebirds returned home on Saturday at the Dort Federal Event Center for a tough loss against one of the league’s top squads, the Kitchener Rangers, 7-2. Brandon Robinson gave the Rangers a 1-0 lead just 1:32 into the game, but Flint responded less than a minute later with a tally from Matyas Kantner.

Kitchener was able to grab that lead back not long after, though, as Darby Llewellyn buried one, followed by a Jeremy Bracco goal late in the period. Early in the second Ryan MacInnis scored, which was succeeded by goals from Connor Bunnaman, David Miller and Miles Liberati within 12 minutes of each other. Flint got the only goal of the third as Samuel Duchesne recorded his first of the year.

The Firebirds capped off a road trip on Thursday with a 5-1 loss to the Niagara IceDogs. Niagara opened the scoring with a goal from Blake Siebenaler just 5:10 into the game. Later in the period, a Jordan Maletta goal doubled the Niagara lead.

Early in the second Flint finally got on the board with a nice move from Will Bitten on a breakaway for a shorthanded goal. But when the third period arrived, Niagara shut the door on the Firebirds. Aaron Haydon buried one to make it a 3-1 game and Kyle Langdon and Graham Knott pushed the advantage to 5-1.

The Firebirds pulled off one of their biggest upsets of the season on the road last Wednesday by topping the league’s best team, the Erie Otters, 5-3.

Flint started off on fire. Ryan Moore got Flint’s first goal with less than five minutes left in the opening period and then Dane Johnstone buried one just a couple of minutes later.

Just 41 seconds after that, Vili Saarijarvi fired one from the point on the power play to give Flint a 3-0 lead after one period. The second period, though, started off with Erie quickly reversing the trend. Alex DeBrincat scored a power-play goal to begin digging the Otters out of the hole and Kyle Pettit made it a one-goal game moments later.

Less than 30 seconds after that, the game was tied on a Brett Neumann goal, making it seem as if Erie was easily going to control the rest of the game. Will Bitten, however, scored on a one-timer from Keenan Reynolds late in the second to take the lead back. Both goaltenders began to shut the door as no one would score until Moore put in an empty netter with 27 seconds left in the game. In net, Kyle Keyser made 41 saves.

The recent losses have officially eliminated Flint from playoff contention. At 20-39-4-2, the Firebirds have only accumulated 46 points, leaving them eight points behind Saginaw for the final playoff spot in the Western Conference with only three games remaining. Even if Flint won the remaining three, it would only add six points.

The Firebirds host London on Wednesday before traveling to Sault Ste. Marie on Friday. Flint caps off the season on Saturday with a home game against Guelph.